Franklin Graham, the man who took his father’s legacy and used it to hurt people he deemed unworthy of his God’s love, went on Facebook to urge Christians to boycott LGBT-friendly companies. 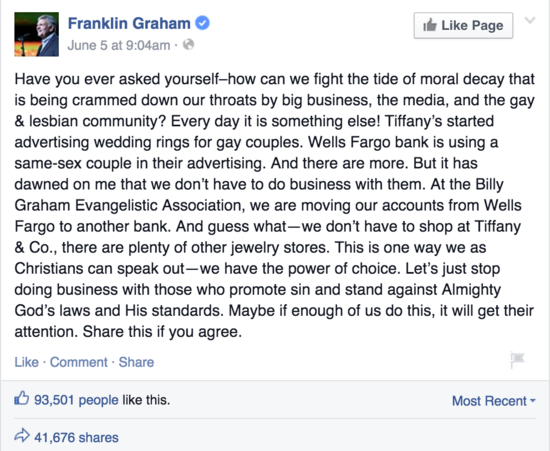 Have you ever asked yourself–how can we fight the tide of moral decay that is being crammed down our throats by big business, the media, and the gay & lesbian community? Every day it is something else! Tiffany’s started advertising wedding rings for gay couples. Wells Fargo bank is using a same-sex couple in their advertising. And there are more. But it has dawned on me that we don’t have to do business with them. At the Billy Graham Evangelistic Association, we are moving our accounts from Wells Fargo to another bank. And guess what — we don’t have to shop at Tiffany & Co., there are plenty of other jewelry stores. This is one way we as Christians can speak out — we have the power of choice. Let’s just stop doing business with those who promote sin and stand against Almighty God’s laws and His standards. Maybe if enough of us do this, it will get their attention. Share this if you agree.

(I would just like to note how I’m completely sidestepping the whole “crammed down our throats” line. Because I’m better than that.)

If you’re a Christian and you don’t want to shop at places that honor LGBT equality, what are you left with? A couple of mom-and-pop bakeries?

an equal opportunity employer and does not discriminate in employment decisions based on any factor protected by federal, state or local law.

So if the law says you can’t discriminate against people on the basis of sexual orientation, this Christian company may very well hire you. It’s not great — it’s like paying employees minimum wage because you can’t pay them any less — but they’re hardly telling their openly gay customers they’re not interested in serving them.

But that’s not what Graham means. He seems to be opposed to companies that try to reach out specifically to LGBT customers… or admit that they exist, in the case of Wells Fargo.

At some point, though, these companies have to make a profit to stay in existence. If they directly oppose LGBT rights, people won’t go there. Not just gay people, either. There’s a huge pool of customers that will buy from those companies that support LGBT rights. This is eventually an economic issue for them as much as they think it’s a moral one. It’s just smart business to reach out to the widest audience out there. To pretend like gay couples don’t exist or don’t need your services — which is what Graham wants them to do — is just plain dumb.

Eliel Cruz points out another irony at Religion News Service:

The irony of Graham posting this on Facebook is apparently lost on him. Facebook is vehemently pro-LGBT and Graham’s post, which has been shared almost 40,000 times, creates revenue for the social media platform.

For Graham to honor his own request, he’d have to abstain from iPhones and remove the Billy Graham Evangelistic Association app from Apple’s iTunes store, avoid using computers with Windows on them, and pull his books from Amazon. All of those companies are openly supportive of LGBT equality.

No word yet on where he plans to keep his money, since most larger banks also support civil rights.

Oh. Hey, Franklin. You know that FitBit you love so much?

The company’s headquarters are in San Francisco. How much you want to bet they support LGBT rights, too?

Can’t wait to see a picture of you throwing out your health tracker.