Dr. Keith Ablow (center, below) is Fox News Channel’s go-to medical expert… meaning his job is to give you the worst possible advice in a given situation. 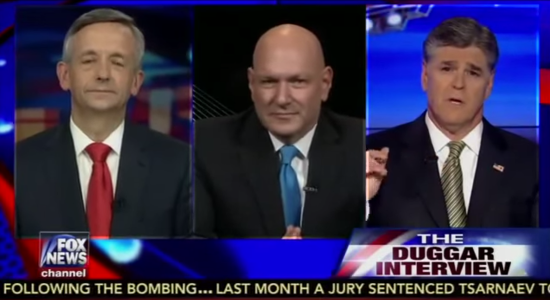 Abortion? Men ought to veto a woman’s choice.

But when he was brought on to discuss Josh Duggar‘s wandering hands and the family in general, he offered the most sensible take on the matter, challenging the counselors Josh Duggar was taken to, raising good points about the family’s version of the story, and questioning the parents’ wisdom in general.

It helps that Ablow was talking to Pastor Robert Jeffress and host Sean Hannity, two men who make everyone else around them sound smart. But when Ablow is the voice of reason, that’s pretty scary. Start listening at 6:01 to see Jeffress start flipping out:

Ablow questioned how multiple girls could remain sleeping as their vaginas and breasts were being felt up, brought up how Josh Duggar’s sexual repression may have contributed to his problems, and argued that having 19 kids means the parents couldn’t supervise them properly.

I suppose I should say something about a stopped clock here, but I think that’s a little generous…

More likely than not, he’ll just slip back into his usual mode when the next crisis hits. Enjoy this one while it lasts.

June 8, 2015 After Judge Stops Rowan County (NC) Commissioners from Praying to Jesus at Meetings, They Vote to Appeal Ruling
"Great question. That’s pretty much my reaction when I hear people talk about the “good ..."
kaydenpat COVID-Spreading Preacher: Joe Biden is Promoting ..."
"I've always like the luxurious feel of 12oo thread count Satan Sheetz."
democommiescrazierbrother COVID-Spreading Preacher: Joe Biden is Promoting ..."
"Yes, but again, that is not the conspiracy theory these Qultists are currently circulating."
WallofSleep Attorney Lin Wood Spreads Deranged Lie ..."
"You’d think the last two would be okay with god botherers but 🤷🏽‍♀️."
kaydenpat COVID-Spreading Preacher: Joe Biden is Promoting ..."
Browse Our Archives
What Are Your Thoughts?leave a comment