On Thursday night, Supreme Court Justice Antonin Scalia spoke at the high school graduation ceremony for the students at Stone Ridge School of the Sacred Heart (where his granddaughter attends).

While most of it was uneventful, this comment was eyebrow-raising: 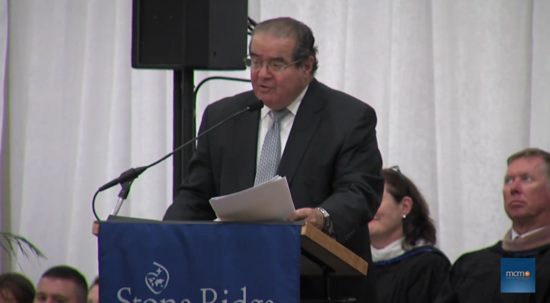 Class of 2015, you should not leave Stone Ridge High School thinking that you face challenges that are at all, in any important sense, unprecedented. Humanity has been around for at least some 5,000 years or so, and I doubt that the basic challenges as confronted are any worse now, or, alas, even much different, from what they ever were.

Modern humans have been around for at least 100,000 years and our predecessors were around for long before that… that is, if you accept science.

5,000 years is the sort of number you’d get if your education came from a Creationist textbook. Or if Ken Ham is your private tutor.

This wasn’t an off-the-cuff remark, by the way. It’s not like Scalia just tossed out a random number to make a point. It was part of his prepared statements. Which is strange, since Catholics tend to be pretty good on the evolution issue.

But it does fall right in line with the I-Hold-Loopy-Religious-Beliefs Scalia, who said in a 2013 interview that he believed in a literal devil.

It’s a sad state of affairs when someone who doesn’t accept basic science sits on the Supreme Court.

You can bet that if Scalia chooses to respond to critics, he’ll inevitably use a legal loophole: I was right! I said “at least” 5,000 years!

(via ThinkProgress. Thanks to Drew for the link)

June 6, 2015
Bill Maher Explains Why Christianity's Not Under Attack from Liberals
Next Post

June 6, 2015 Nothing: Beats the Power of Prayer
Browse Our Archives
What Are Your Thoughts?leave a comment