Bill Maher Explains Why Christianity’s Not Under Attack from Liberals June 6, 2015 Hemant Mehta

Bill Maher Explains Why Christianity’s Not Under Attack from Liberals

On last night’s Real Time, Bill Maher asked the question of why Republicans are so quick to jump on the “liberal media” for “attacking” Christianity when no prominent liberal (other than himself) ever seems to do anything of the sort: 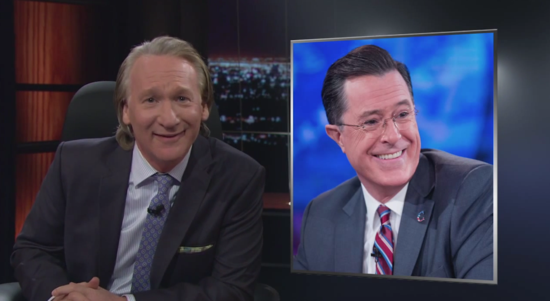 This idea that everybody on the Left is plotting against Christianity and wants to wipe out religion is offensive — to me! ‘Cause I’m the only media figure with a show, week in and week out, that says that! And I’ll be damned if the credit’s gonna go to the entire Left when I’m doing all the heavy lifting!

I really want to know! Where is religion belittled in the liberal world?… Newsweek and Time? Hah! They put Jesus on the cover more often than Cat Fancy puts a cat! Are we talking about athletes? If they so much as fart on the field, they point to the sky and give God credit. Football players have prayers circles after the game and only half of them have the excuse of brain damage! So who? Who?!

Almost nobody. While some high-profile liberals may talk about demographic shifts and news involving atheists, you’ll rarely hear them advocate for it.

Which is especially ironic given how many atheists love to complain about Maher for being Islamophobic or wrong on vaccines. (And now I feel dirty for linking to Salon multiple times…)

It’s not that we shouldn’t complain when Maher gets something wrong, but Maher deserves more credit than he gets for being one of the rare voices on television not afraid to call out religious bullshit for what it is.

June 6, 2015 Justice Antonin Scalia Suggests Humanity Is Only 5,000 Years Old
Browse Our Archives
What Are Your Thoughts?leave a comment