When doing the right thing comes in conflict with following the doctrine of your religion, what should you do?

It’s an easy question if you’re a Jehovah’s Witness. You have to please God no matter what, even if it means cutting ties with your own children because they no longer believe as you do. It’s a process called disfellowshipping and it’s as awful as it sounds.

At a recent JW conference, Robert and Brenda Sutton spoke about how one of their children had “questionable association” (whatever that means) with someone at work… which eventually led to the child being disfellowshipped. 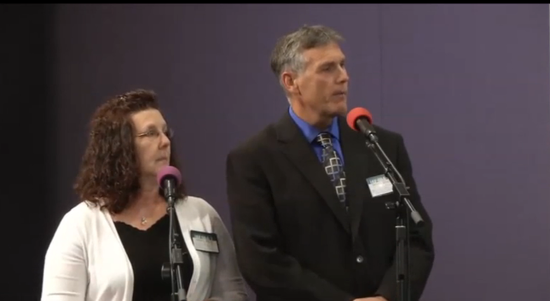 Robert Sutton: We began to question ourselves as parents. I mean, where did we go wrong? Were we too strict? Were we too lenient? Just what did we do that was wrong? But one thing we did for sure, and that’s in addition to multiple times with praying to Jehovah, we made sure that we cling to our spiritual routine.

That meant no contact with their child…. but the moderator soon mentioned that the child returned to Jehovah. How did that happen?

Brenda Sutton: Well, it was the missed association with the family. And here’s why: I had always told our kids… “I would die for you, I love you, would die for you, but if you ever leave Jehovah, I wouldn’t be there.” And they knew that we wouldn’t waver on this. But, sad to say, and as hard as it was, we had to cut off all association.

For all we know, the only reason the child returned was to see the parents, not because they suddenly believed what the religion preaches. If that’s true, then the child had more love for the parents than the other way around.

Yet when the Suttons finished speaking, the audience gave them an enthusiastic round of applause, as if they did something right. They should have been gasping.

Lloyd Evans points out what the moderator and the Suttons never brought up:

What makes this video especially difficult to watch is how the parents who did the shunning are quick to portray themselves as victims in this scenario, with seemingly no thought for the trauma of ostracism inflicted on their child.

Real love is when you stand by your child no matter what, through good times and bad, and sadly JW parents who capitulate to the cruel and baseless rules about shunning can never lay claim to such love. Their love is conditional — based on their offspring sharing the beliefs they have been indoctrinated [to] accept, usually by their own parents.

Any belief system that requires you to remain in a bubble, forbidding you from associating with anyone who has been kicked out of the church even if you’re related, is fucked up beyond repair. It’s a cult. And it needs to be exposed as such.

June 6, 2015
Nothing: Beats the Power of Prayer
Next Post