A lot of high schools have baccalaureate graduation ceremonies — alternative celebrations with a religious twist that aren’t supposed to be connected to the District itself. The idea is that you can have religious speakers invoke God in a legal way since these are privately-run events.

But at the ceremony for students at Kings Mountain Senior High School in North Carolina, the main speaker used the opportunity to tell gay students they’re going to Hell: 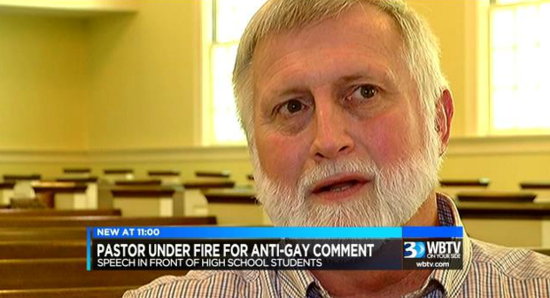 A student tells WBTV [Pastor Scott] Carpenter told the audience they would go to Hell if they were homosexual.

“Do I hate anybody? Absolutely not. I just love them too much not to tell them the truth,” Carpenter said.

“Nobody got bashed or anything. All I did was simply speak biblical truth… The number one audience that I have to please is God,” Carpenter said.

And he had to do it. He had to take these students’ accomplishments and find a way to denigrate some of them for something completely out of their control. Instead of celebrating their successes, he condemned the students who didn’t share his sexual orientation by letting them know they would burn in Hell for eternity. (Because, you know, God loves them.)

Once again, a Christian tries to hide his own bigotry by saying he’s just speaking for God…

I guess no one running the event bothered to check his speech beforehand. Or, if they did, they didn’t find it problematic.

This is the sort of thing that can happen at a baccalaureate ceremony. I’m glad it doesn’t happen often, but when you open the door to faith-based preaching, even at an event like this, these outbursts shouldn’t surprise you.

Like I said, though, this isn’t the District’s fault. It’s the fault of local religious leaders who organized the event. But it also reminds us why public school graduation ceremonies must stay clear of promoting religion through invocation prayers. The focus should remain on the students — what they learned as they transitioned into adulthood and what they ought to remember as they move to the next phase of their lives — instead of the mythology of the majority.

Faith isn’t a virtue and Carpenter shows us why.

June 5, 2015 Criminal Charges Filed Against Minnesota Catholic Archdiocese Over Mishandling of Sex Abuse Claims
Browse Our Archives
What Are Your Thoughts?leave a comment