What Did We Learn from Last Night’s Interview with the Duggars? June 4, 2015 Hemant Mehta

What Did We Learn from Last Night’s Interview with the Duggars?

What were the takeaways from Megyn Kelly‘s interview last night with Jim Bob and Michelle Duggar? 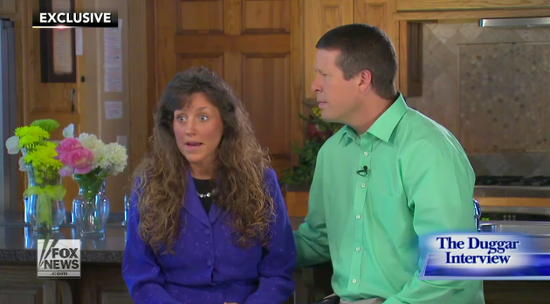 So… we learned nothing, really.

The Washington Post‘s Abby Ohlheiser gives a more thorough rundown of the interview.

Here’s my brief takeaway: Everything I assumed about the Duggars turned out to be accurate. I think they care more about the reputation of their son than the safety of their daughters. I don’t believe they did enough to take care of the problem — the safeguards they put in place weren’t enough — and they still haven’t proven to viewers that they know any better now. They’re quick to play the Christian persecution card, as if that’s the real reason people are upset with them. (To be honest, it seems like critics online show more concern about their daughters’ welfare than they do.)

Maybe they haven’t learned anything because they’re too busy convincing themselves they did nothing wrong.

That’s why their show should be yanked from TLC’s lineup. Not just because there’s a child molester in the family, but because this “wholesome” Christian family has shown us they’re really not worth admiring. Given the chance to show some remorse and responsibility for what happened, they blamed everybody else. Given the chance to correct a lot of the stories out there, they confirmed them. People watch them (so I hear) because of their values. If that’s true, they lost their biggest selling point.

They are who we thought they were.

There is more to the interview — including a conversation with two of the victims — that will air Friday night. I doubt there will be any new revelations then, but we’ll see.

On a side note, I saw a lot of criticism online about how Megyn Kelly was too soft on the Duggars. I disagree. She did a great job. I thought she was going to limit herself to softball questions, but she raised most of the issues I hoped she would. She appeared sympathetic, which I’m sure annoyed a lot of viewers, but that’s what hosts do during post-scandal interviews. You’re not gonna get much out of your subjects if they think you’re attacking them. So I wouldn’t hold that against her.

June 4, 2015
Child in Spain Diagnosed with Diphtheria Because His Parents Didn't Vaccinate Him
Next Post