Two Christians Are Suing the Studio Behind God’s Not Dead for $10 Million for Stealing Their Idea June 3, 2015 Hemant Mehta

Pure Flix believes these allegations to be false and intends to honor the process of the legal system while vigorously defending this lawsuit.

As much as we love to hate it, the Christian film God’s Not Dead was an indisputable success. It cost $2 million to produce and earned more than $60 million in the box office for its producers at Pure Flix.

And now the movie studio is being sued by two Christians who say the company stole their idea. 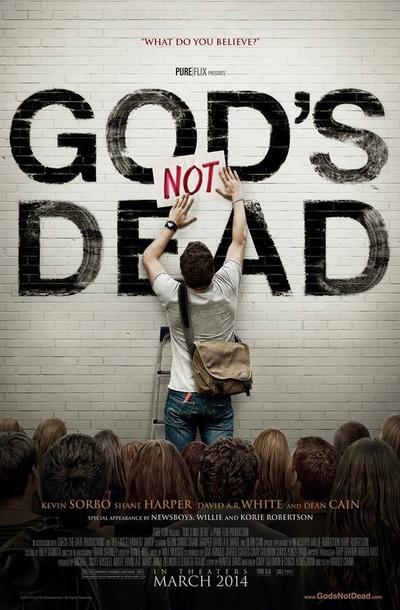 According to a lawsuit obtained by Deadline, John Sullivan and Brad Stine wrote a film called Proof in 2009, which was like a “faith-based Dead Poets’ Society.”

After a lot of back-and-forth, and after the two individuals declined a few thousand dollars which the studio was offering them for the script, Pure Flix decided not to go forward with the film in 2012.

At the same time, the lawsuit alleges, the studio began working on God’s Not Dead, its own version of the same film…

If you’re familiar with God’s Not Dead, then this part of the plot for Proof will look very familiar:

At the core of this internal conflict is an engaging professor described and/or portrayed by Plaintiffs in the Proof Treatments as a militant atheist (the “Atheist Professor”) who openly mocks Professor Daniels’ Christian ideology, and further goes so far as to administer a failing grade to a Christian student (“Josh”) who incorporates “Intelligent Design” into one of his papers.

There’s a lot more than that, but the pattern is very similar. Pure Flix didn’t change the Christian student’s name for God’s Not Dead. Or the anti-atheist stereotypes, for that matter…

Maybe the most surprising thing about this lawsuit is that there are people fighting very hard to claim that they came up with the concept for this film. You’d think most decent people would run the hell away from that.

But if the allegations are accurate, Pure Flix would owe them a lot. Sullivan and Stine are asking for a jury to award them at least $10 million in compensatory damages and for the studio to “disgorge their profits” to them. Lots of money at stake here.

How ironic would it be for the studio that created one of the most successful Christian films of all time to be punished for violating one of the Ten Commandments?

Get your popcorn ready.

(Thanks to Jody for the link)

June 3, 2015
A Wonderful (Long) Explanation of Why Tesla Cars Are So Amazing
Next Post

June 3, 2015 Pastor Creflo Dollar May Get His $65 Million Private Jet After All
Browse Our Archives
What Are Your Thoughts?leave a comment