Seth MacFarlane Mocks His “Genius” Award By Pointing Out How It Comes from the Network Airing Duck Dynasty June 3, 2015 Hemant Mehta

If that sounds a bit overblown to you… well, he felt that way, too.

But during his acceptance speech, he used the opportunity to both mock the award and the network that was airing it. 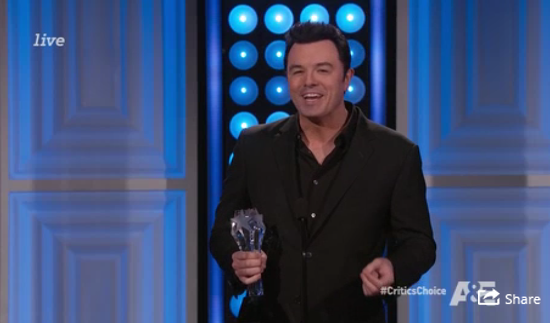 Let’s also not forget, I’m being called a genius on the network that airs Duck Dynasty.

This is a show whose cast members believe hurricanes are caused by gay marriage. I wish I were joking.

The whole speech was self-deprecating and hilarious… and I would love to show it to you except A&E only bothered to put up a minute-long clip on YouTube and it didn’t even contain his best lines.

All that said, MacFarlane was honored for his animated shows, movies, and for spearheading the Emmy-winning COSMOS reboot starring Neil deGrasse Tyson. He deserves a lot of credit for use his fame and money to promote projects like that which probably wouldn’t get off the ground otherwise.

June 4, 2015 Watch Matt Dillahunty Respond to the Idea That Atheists Treat Science as a Religion
Browse Our Archives
What Are Your Thoughts?leave a comment