Mike Huckabee: If They Let Me, I Would’ve Said I’m Transgender to Shower with Girls in High School June 2, 2015 Hemant Mehta

Mike Huckabee: If They Let Me, I Would’ve Said I’m Transgender to Shower with Girls in High School

Back in February, Mike Huckabee gave the closing speech at the 2015 National Religious Broadcasters Convention in Nashville, Tennessee. But his comments didn’t go online until this weekend (thanks, WND… I think).

Now, the man who defended Josh Duggar for molesting five little girls when he was younger is making headlines for his statements about transgender people.

According to Huckabee, allowing transgender people to use the restroom that’s appropriate for them means putting little children in harm’s way. (Watch at the 18:04 mark.) 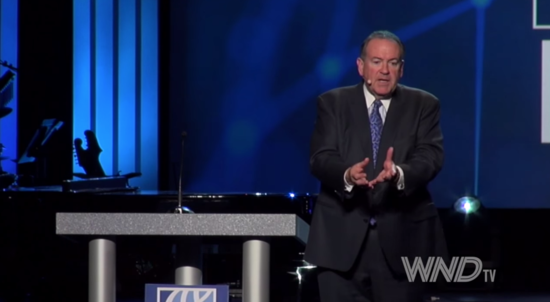 … And for those who do not think that we are under threat, simply recognize that the fact that we are now, in city after city, watching ordinances say that your seven-year-old daughter, if she goes into the restroom, cannot be offended and you can’t be offended if she’s greeted there by a 42-year-old man who feels more like a woman than he does a man.

Now I wish that someone told me that when I was in high school that I could have felt like a woman when it came time to take showers in PE. I’m pretty sure that I would have found my feminine side and said, ‘Coach, I think I’d rather shower with the girls today.’

You’re laughing because it sounds so ridiculous, doesn’t it?

I’m tempted to point out that no public school policy allows students to use whichever bathroom they want at anytime.

But screw it. Huckabee doesn’t give a damn about the facts. He’s a Christian. Therefore, whatever he believes, no matter how bigoted and wrong he is, has to be true because Jesus made it so.

It’s not like he’s ever going to speak with an LGBT group to better understand the issue. He’s not going to apologize or correct himself because it’s beneath him to do so. He sees LGBT people as intrinsically disordered and that’s never going to change for him. His popularity and fame depends on him never understanding this subject.

Even worse is that I doubt any of the other GOP Presidential candidates will disavow these comments. They’re no better than he is on LGBT rights. That’s why, if you care about civil rights and basic decency, it’d be dangerous to support any of these people in the White House.

On a side note, these comments were made at a broadcasters’ conference. There were all sorts of journalists there… and yet no one saw this as newsworthy?! What does that say about the Christian reporters in attendance?