If You Promote a Story That Turns Out to Be False, Don’t You Have an Obligation to Correct It? June 2, 2015 Hemant Mehta

If You Promote a Story That Turns Out to Be False, Don’t You Have an Obligation to Correct It?

As anyone who reads atheist blogs is probably aware, there have been some high-profile (at least within this community) cases of sexual harassment (and worse) over the past few years.

One case in particular involved Ben Radford, a prominent skeptical writer. He was accused of “stalking, sexual harassment, and both physical and sexual assault” by his former girlfriend Karen Stollznow (a prominent skeptic in her own right). It’s been going on for a couple of years with both sides raising money for legal defense.

Without going into more details (and there are so many more details), those are damning allegations and Radford denied them completely. But several bloggers were quick to condemn him (or at least perpetuate the story) based on what Stollznow said.

That alone doesn’t bother me. Sexual harassment is a serious topic and I appreciate those with the courage to address the issue. If it makes us more aware of the problem so that we can take steps to prevent it, we’re all better off for it. (I’m not a fan of bloggers with limited information playing the role of a judge who’s supposed to have all of the information, but there you go.)

Then, nearly two weeks ago, Radford shared a statement that both he and Stollznow signed: 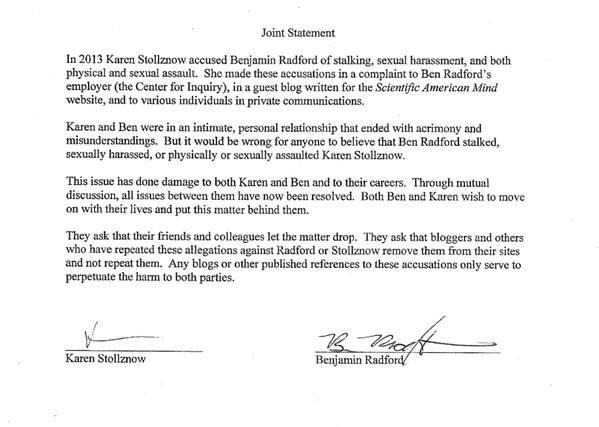 Part of it says:

… Karen and Ben were in an intimate, personal relationship that ended with acrimony and misunderstandings. But it would be wrong for anyone to believe that Ben Radford stalked, sexually harassed, or physically and sexually assaulted Karen Stollznow.

The issue has done damage to both Karen and Ben and to their careers. Through mutual discussion, all issues between them have now been resolved. Both Ben and Karen wish to move on with their lives and put this matter behind them.

Just to verify this, I asked Stollznow last week if she really signed that statement. While she wouldn’t give me a definitive answer, she didn’t deny it either, saying she couldn’t speak about this matter in public.

Here’s why I’m bringing all of this up:

Stollznow now says the allegations weren’t true. Maybe you believe her. Maybe you think there’s more to the story. Maybe you think she signed it only because it was costing too much to keep fighting this battle in court. But as far as the legal system is concerned, this issue has been resolved. Radford has been cleared of any wrongdoing.

And yet every single one of the bloggers I linked to above has been silent about this matter. Unless I missed it, they haven’t posted the joint statement. They haven’t updated old posts with a mention of it. They haven’t offered their opinion on it one way or the other. As far as they’re concerned, Radford is still a bad guy even though the statement explicitly says he didn’t do what he was accused of doing.

They owe him an apology.

Or, at the very least, they should tell us why he doesn’t deserve one.

There have been times we’ve posted stories on this site that turned out to be false. Whenever that comes to our attention, we issue a public retraction (or, in smaller matters, we put an update on the original story, just in case someone stumbles across it online). Why wouldn’t we do that?

I feel the same way about this story, even if Radford and Stollznow want to put it to rest: If those bloggers felt it was appropriate to write about this story in the past (and throw Radford under the bus in the process), then they have a responsibility to address the resolution now.

I’m not saying they have to agree with it, only that they owe it to their readers to provide an update. If they don’t believe the statement is accurate or legitimate, so be it. They can tell us why.

Maybe they’re just completely unaware of the statement. If that’s the case, fine. I hope they see this post and correct the record as soon as possible.

But to pretend like it doesn’t exist — and to let their readers keep believing that Radford is guilty of these crimes — is just irresponsible. When the evidence contradicts what you’ve written, especially when someone’s reputation hangs in the balance, you should correct it. Or at least explain why you’re not.

***Update***: Greta Christina informs me that this is the first she’s heard about this apology and she’ll address it soon. I apologize if my piece suggested she knew about this and chose to remain silent. I don’t know what information she has. As I told her, it just seems strange to me that, even though some people were providing almost-constant updates on this story, this bit of information escaped their radar. Anyway, if this is the first time they’ve heard about it, then they deserve time to analyze it and respond however they’d like.

(Image via Shutterstock. Via Strange Frequencies Radio, beginning around the 1:32:58 mark)

June 2, 2015 Indiana Family Sues School District Over Prayers at Athletic Events, School Board Meetings, and Graduation
Browse Our Archives
What Are Your Thoughts?leave a comment