Pastor Who Thinks He Raised Man from the Dead Has an Anonymous Doctor’s Note to Back Up His Story June 1, 2015 Hemant Mehta

A few days ago, I wrote about Pastor Robby Dawkins (no relation to Richard) and how he thinks he helped raise someone from the dead (with God’s help, of course).

In short, Dawkins said a man started convulsing as he was about to give a sermon. Dawkins ran to the man’s side, rebuked the “spirit of death,” and helped the man recover!

That man’s sister, however, refutes the entire story. She says he was simply having a seizure. While he needed hospitalization, he was never dead. She went on to claim that the pastor of the church that invited Dawkins to speak even apologized for bringing him there.

Now, Dawkins is trying to do damage control, and it’s hilarious.

He first reposted the doctor’s report verifying what happened at the event:

So he had a pulse… and he was breathing… but he was totally dead.

Keep in mind this isn’t an official report. And it’s weird that we never get to know the name of the doctor…

But Dawkins may not realize that Facebook saves previous edits to your Facebook posts, and if you look up an earlier version of the piece, the doctor’s name is right there: 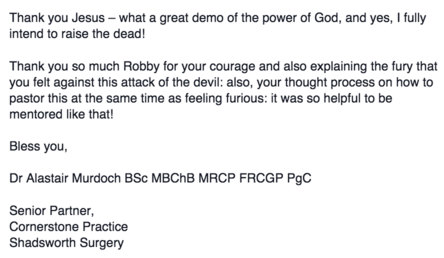 Murdoch is a general practitioner (not someone who specializes in epilepsies) who uses his platform to promote Christianity.

I’m not questioning his credentials, only that this hardly qualifies as an unbiased, official report.

But this is the best Dawkins has to offer. A bullshit “Doctor’s Note” written by someone who just happens to be a Christian not specializing in the disorder the man had, “eyewitness testimony” by someone who certainly has no medical background and didn’t even bother videotaping the incident, and a slam on the man’s actual family for questioning Dawkins’ Total Awesomeness:

Multiple Eyewitnesses, Dr. Report or an unbelieving sister who wasn’t present during the miracle… You decide.

I’m going with the sister who talks to the brother on a regular basis and is simply appalled at how Dawkins is using her family in order to promote himself, even if the facts of the story don’t add up.

It’s pathetic, it’s manipulative, and it’s all in the name of Christ.

I reached out to Dawkins last week for more information on this story. He still hasn’t responded.

June 1, 2015
The #CharlieCharlieChallenge Was a Giant Marketing Stunt... Say Those Who Believe Anything You Tell Them
Next Post

June 1, 2015 Here Are a Bunch of Christians Telling @Caitlyn_Jenner She Needs Jesus in Her Life
"The RCC can't afford to abandon their magic and hate, and people like this help ..."
San_Ban Catholic Cardinal Claims COVID Vaccine Contains ..."
"Looks like Angel doesn't understand that it was the religious who called us baby eaters ..."
NOGODZ20 A Prominent Anti-Vaxxer Is Now Apologizing ..."
"Correct. You should have Shingrix, even if you have had an outbreak before, or you ..."
lady_black A Prominent Anti-Vaxxer Is Now Apologizing ..."
"Ramsey has never done anything to avoid being labeled a cock. Beyond being a boss ..."
tinyhands Christian “Financial Guru” Dave Ramsey is ..."
Browse Our Archives
What Are Your Thoughts?leave a comment