Earlier today, comedian Tracy Morgan gave his first interview since being in an accident that killed one of his friends.

During the segment with Matt Lauer, Morgan thanked lots of people involved in his recovery: The doctor, the nurses, his family, the police, the passers-by on the side of the road who stopped to help him out, his drivers, the people piloting the helicopter that took him to the hospital, etc.

Never once did he mention God. 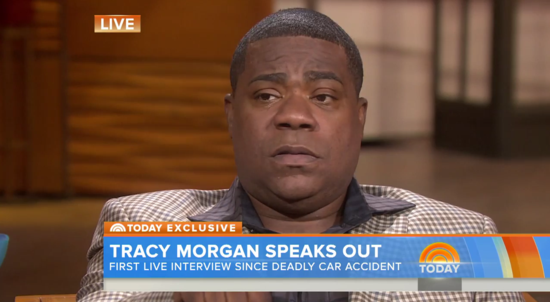 How refreshing to hear someone give credit where it’s due. That’s not to say Morgan is an atheist — he’s never said that as far as I can tell — but it was a notable omission for an interview involving anyone recovering from a serious accident.

Reader Ryan, who pointed this out, says it reminds him of Daniel Dennett‘s “Thank Goodness I’m Alive“:

June 1, 2015 Ken Ham Thinks the Creationist Who Stumbled Upon a Fossil Was Doing Real Science
"It's not really a joke if nobody can tell it's one, just like satire.Either way, ..."
SltryPrNstyBrtsh&Shrt “Prophetess”: I’ve Time-Traveled and the Media ..."
"He's a musician working in the black metal genre. It's his job to be as ..."
Satanic Donut Poland Singer Charged with Blasphemy Wants ..."
"Nah, we will be ducking the multitude of canards flying from this guy's mouth."
James A. North Christian “Prophet”: The Military Will Soon ..."
"Conditionally, yes they can. I say conditionally because it assumes that the military doesn't fracture ..."
Kit the Coyote Christian “Prophet”: The Military Will Soon ..."
Browse Our Archives
What Are Your Thoughts?leave a comment