The Unlikely Miracles Used to Justify Sainthood for Recent Popes May 31, 2015 Bo Gardiner

The Unlikely Miracles Used to Justify Sainthood for Recent Popes

Last year, the Catholic Church announced the sainthood of two former popes, John XXIII, who was pope from 1958 to 1963, and John Paul II, pope from 1978 to 2005. The church’s requirement for sainthood is two miracles worked by them after their death, which are needed to prove they’re in heaven and accepting prayer requests from back home on Earth. 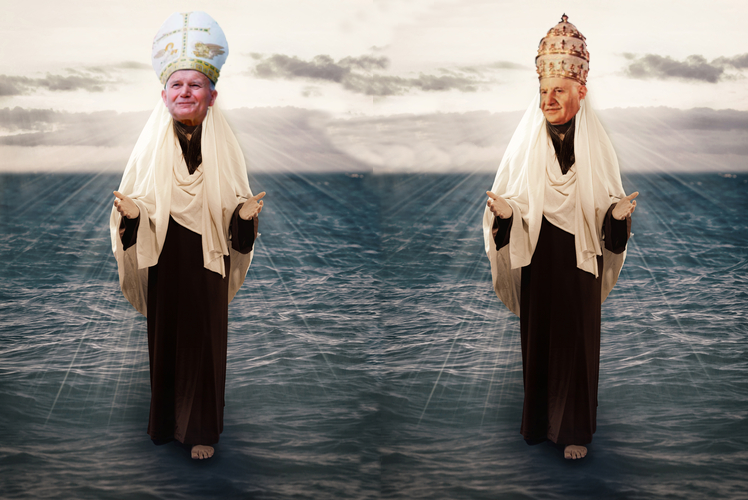 Joe Nickell, paranormal investigator extraordinaire, wrote in the latest Skeptical Inquirer about the Church’s latest (incredibly weak) case for Pope miracles. For starters, he explains, most claims of medical miracles have at their heart a fatal flaw: the argument from ignorance:

The major criterion for a healing to be classified as a miracle is that, in addition to being instantaneous and permanent, it be “medically inexplicable.” This is an attempt to use negative evidence. Claimants are therefore engaging in a logical fallacy called argumentum ad ignorantiam “an argument from ignorance.” That is, one cannot draw a conclusion from a lack of knowledge: “We don’t know why her symptoms went away; therefore, it was a miracle.”

In fact, such cases do have alternate explanations: some illnesses (such as multiple sclerosis) are known to show spontaneous remission. Other “cures” may be attributable to misdiagnosis, psychosomatic conditions, prior medical treatment, the body’s own healing power, and other effects.

Not to mention the possibilities of plain old fakery, dishonesty, or exaggeration. Because those never happen…

Let’s look first at the miracle of the French nun, Sister Marie Simon-Pierre Normand, who claimed to be cured of Parkinson’s disease after she prayed to the deceased Pope John Paul II. Nickell lists a number of problems with her claim that the Church ignored, including these:

… three years after Sister Marie claimed to have been miraculously healed she had relapsed… One of the doctors investigating her case was of the opinion that she had not actually suffered from Parkinson’s, observing that a similar nervous disease could go into remission.

Nickell points out the irony of the church using this as a basis for John Paul’s sainthood, given that John Paul himself had Parkinson’s (or a closely related disorder), for which he sought a cure in vain:

For years before he was diagnosed in 2001, Pope John Paul II had been observed with symptoms of apparent Parkinson’s disease. By 1996, he was unable to walk without the aid of a stick, and he could not control the tremors of his left hand…

With added knee and hip debilities, the ailing pope visited Lourdes, the French healing shrine, in August 2004. Far from being healed, he struggled through Mass, gasping and trembling… the claimed healing powers of Lourdes — and of various other shrines he visited, prayers he made, and holy relics he kissed — were ineffective, even for the head of the church that promotes claims of such miracles. He died the following year.

In other words, papal spin doctors want us to believe that John Paul II’s ghost did for Sister Marie what God and the Virgin Mary failed to do for John Paul II.

But his ghost is so powerful, apparently, that he can also work his magic through a photo in the newspaper:

Reportedly, in April 2011 Diaz walked into a San Jose hospital complaining of headaches. A neurosurgeon diagnosed an aneurysm, which he felt was inoperable. He sent her home to rest and to take medication for pain. In short order, however, she was healed, according to her doctors. She attributed the “miracle” to her gaze having fallen upon a photograph of John Paul in a newspaper…

While the Associated Press wrote of “the symptoms that she felt brought her to the brink of death three years ago”…, Diaz may have had an exaggerated view of her own prognosis at the time. In fact, a cerebral fusiform aneurysm, like she supposedly had, does not usually rupture … And because high blood pressure is associated with cerebral aneurysms, reducing it (and other associative factors such as smoking, drinking, and using cocaine) may well be therapeutic.

So, are you impressed?  Are you now convinced John Paul II is in heaven healing the sick?

The church set the bar even lower for John XXIII. When the current Pope Francis was planning to name some saints, he conveniently decided to waive the two-miracle rule for John and let him slip by on just one — something about extra credit for organizing Vatican II. Because the only miracle they had was this supposed healing of an Italian nun:

The nun, Sister Caterina Capitani, was hospitalized and underwent a five-hour operation to remove most of her tumor-studded stomach, along with her pancreas and spleen. Over several days she began to recover but noticed that a fistula (an abnormal opening) had developed on her abdomen, allowing gastric fluid, blood, and a little orange juice she had sipped, to flow out. Later she covered the area with a relic — a piece of the sheet upon which Pope John XXIII had died. Still later, she awakened to a vision of the dead pontiff and found herself healed…

In fact, Mrs. Capitani, who died in 2010 at age sixty-eight, obviously benefitted from several successful surgeries. It was not a miracle by the deceased Pope John XXIII that removed her stomach tumors; it was medical science. As to the alleged fistula, it may have been nonexistent, a mistaken claim to explain stomach contents that appeared on her abdomen but that may have simply resulted from “a serious crisis of vomiting.” Capitani had a “very high fever” and may have misperceived the situation. She is the source of the second-hand claim, attributed to an unnamed doctor and apparently not otherwise documented… Alternately, if it actually existed, the wound had eleven days to heal naturally…

And voilà! That will be Saint Pope John XXIII to you. Because it’s so much more likely that a bit of Pope shroud healed Sister Caterina than the several skilled surgeons who operated on her.

That’s it, folks. This is the evidence the Catholic Church says proves that two recent popes are now in heaven hearing our prayers and working miracles, therefore deserving to be declared saints. And that’s supposedly drawing on modern standards of scientific evidence and medical documentation.

If that’s the best they can do in the 21st century, what of earlier eras? One can only imagine the even-flimsier explanations.

Does this institution expect anyone but fervent believers to take its claims seriously? Does it care if we do or don’t? I honestly have no idea. I do know that any secular group, after making such ridiculous claims, would never be taken seriously again.

So when this same institution also claims to know that a supposed Creator of the Universe will eternally torture those of us who disagree with them, it’s probably fair to say some doubt may be in order.

May 31, 2015
Unless Your Atheism Inspires You to Make This World a Better Place, What Good Is It?
Next Post