New Biblical Guide to Hell for Small Children is Sick and Depraved May 31, 2015 Bo Gardiner

To be honest, I was unaware that people calling themselves Puritans still existed.

A new Christian book for children, The Cage: A Young Children’s Guide to the Biblical Teaching on Hell, by C. Matthew McMahon, Ph.D., Th.D., was published this month by Puritan Publications of Tennessee. McMahon is an American Calvinist Reformed theologian, adjunct professor at Whitefield Theological Seminary, and editor of A Puritan’s Mind, which the publisher’s promo describes as “the largest Reformed website on the internet for students of the Bible concerning Reformed Theology, the Puritans and Covenant Theology.”

The “tastefully illustrated” book is “aimed at children 5 to 9 years old.” The dedication page gives a taste of the dark things to come:

Those “tasteful illustrations”? Take a look at just one page: 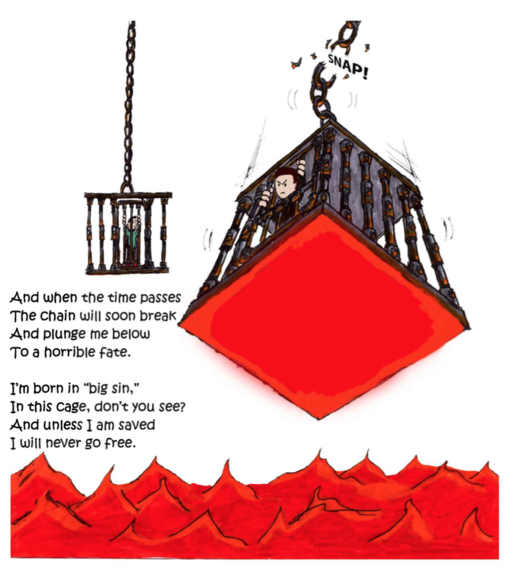 Here are the book’s main lessons about hell for small kids:

Hell is the furnace of fire where people go who die in their sins without being saved by Jesus… The people in hell are there forever, without any possibility of relief by the mercy or pity of God.

Yes, this man wants parents to teach small children that Jesus will torture them in fire forever if they don’t “trust” him. I realize this is nothing new, but I will never stop being shocked by it. And now these people have the Internet and e-books to push their evil dogma.

In a “Note to Parents” in the back of the book, McMahon writes:

Some parents may be thinking that this kind of exhortation to children will give little ones horrible nightmares… It would be better for them to have nightmares now while you teach them about the realities of hell… than to wind up in the reality of the nightmare that is hell. To the Christian parent of young children, I plead with you to… teach your children about hell and the power of God’s wrath. Teach them that Christ is their only hope… Teach them that they are locked in a spiritual cage and that it dangles over the fires of hell. 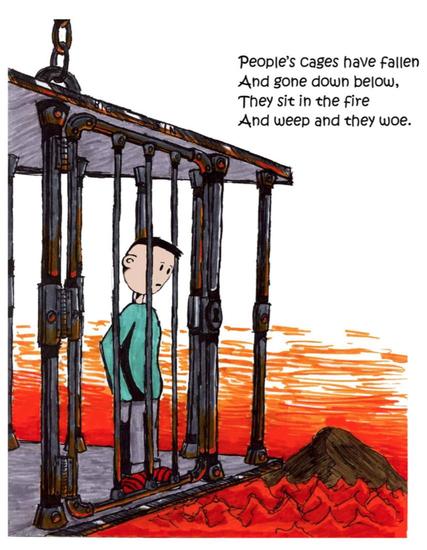 Profoundly disturbing. And not just for teaching children that “woe” is a verb. The book ends with “Bible Verses Concerning Hell,” including these:

“For a fire is kindled by my anger, and shall burn to the lowest hell; It shall consume the earth with her increase, And set on fire the foundations of the mountains.”

“Let death seize them; Let them go down alive into hell.”

“Then the beast was captured, and with him the false prophet… These two were cast alive into the lake of fire burning with brimstone.”

I have nothing new, really, to add to what greater minds than mine have said about the depravity of this ideology. Christopher Hitchens described the teaching of hell to children as “wicked in the extreme.” Greta Christina calls it “child abuse.” Dan Arel agrees, finding it immoral and sickening.

Quite simply, this book — and this belief — leave me speechless in sadness and anger. This is surely one of the most evil ideologies ever formed in the minds of men.

May 31, 2015
Pittsylvania County Officials Lose Long-Running Fight to Pray to Jesus at Meetings
Next Post