Why Does Everyone Hate the Atheist Voodoo Doll…? May 30, 2015 Hemant Mehta

Why Does Everyone Hate the Atheist Voodoo Doll…?

The American Humanist Association recently uploaded several videos from its recent conference in Denver, and there’s a segment of researcher Will Gervais‘ speech that I really wanted to highlight.

It begins at the 37:20 mark. Gervais wonders what the consequences of anti-atheist prejudice are, so he conducted an experiment in which participants were allowed to put pins in voodoo dolls after some prompting. There was a gay doll, Muslim doll, atheist doll, and religious doll. (I’m obviously simplifying a much more complex study.)

Turns out people wanted to stick a lot more pins in what they believed was the atheist doll. 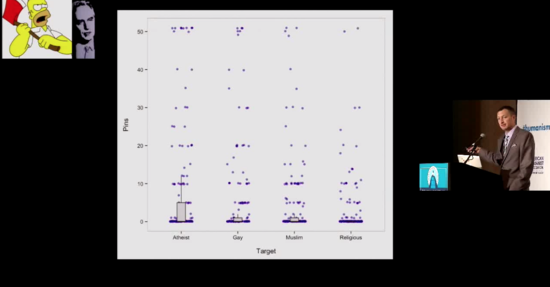 The paper in which Gervais discusses this study will hopefully be published soon. In the meantime, feel free to suggest ideas for that paper’s title!

May 31, 2015 An Unusual Message from Pat Robertson
Browse Our Archives
What Are Your Thoughts?leave a comment