Two Girls Sat Out Part of a Soccer Tournament Because Muslim Players Refused to Compete Against Them May 30, 2015 Hemant Mehta

It’s not very often we see Catholics in the news for doing the morally correct thing, but they deserve credit this time. 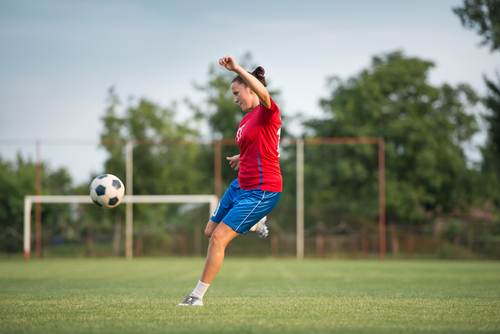 It has to do with this rule for kids playing sports:

“If a sport activity is not available for a female on a girls’ team, she is eligible to participate on a boys’ team following a successful tryout.”

That’s how Robert F. Hall Catholic School ended up having two girls on its boys’ soccer team. They were good enough to make it on their own merits. Good for them!

In a recent tournament match against the ISNA Private Islamic High School, their team was up 3-1 at halftime… when the Muslim team pulled the ref aside to voice a concern:

“We were a little bit caught off guard because we assumed it was a senior boys league and exclusively for boys,” Essa Abdool-Karim. the coach of the ISNA High School soccer team, said.

“Free mixing is generally something we do not do, more so out of respect than anything,” he said.

The correct response here is: “Too bad. I guess you lose the game by forfeit.”

Instead, the girls just sat out the second half. It wasn’t out of deference or anything like that. The way the tournament worked, they needed to win by more than two goals in order to advance in the tournament, so a forfeit by the Muslim team would’ve actually hurt the girls’ team. The strategy — if you can call it that — worked, since their team kicked even more ass in the second half, ultimately winning 6-1.

[Carla] Briscoe, who is one of only two female players on the Robert F. Hall team, has been left with some feelings of bitterness.

The two teams could have faced each other in the tournament finals, but the Muslim team lost their semifinal match.

Needless to say, the Region of Peel Secondary School Athletic Association (ROPSSAA) needs to clarify their rules so that this never happens again. A team with girls on it shouldn’t be punished, even indirectly, for doing the right thing. And if the Islamic High School can’t abide by the rules of the league, they don’t have to be a part of it.

(Image via Shutterstock. Thanks to Katherine for the link)

May 30, 2015
UK Hasidic Leaders Ban Women at the Wheel; Kids Whose Mothers Drive Will Be Expelled From School
Next Post

May 30, 2015 After "Auditing" the Field Museum, Megan Fox Visits the Creation Museum
Browse Our Archives
What Are Your Thoughts?leave a comment