In Swing States, Christians are Fading and Nones are Rising May 29, 2015 Hemant Mehta

In Swing States, Christians are Fading and Nones are Rising

Maybe if we keep giving politicians reason to pay attention to those of us without religion, some of them (hi, Bernie Sanders!) will take the hint.

Using the Pew Research Center’s 2007 Religious Landscape survey and their own 2014 American Values Atlas, the Public Religion Research Institute took a look at the religious demographic changes in the political swing states.

They found that, down the line, every state is losing Christians and gaining people without religion. 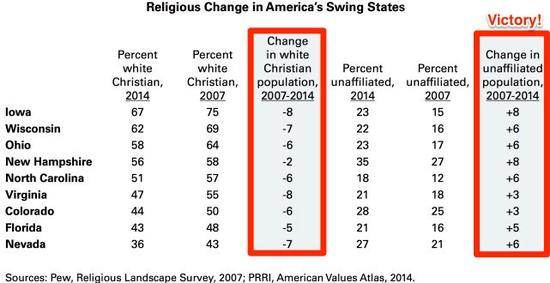 Okay, so the religious still have a *huge* leg up in every state… but we’re slowly gaining on them. In the primaries and the general election, these are the states where the scale could tip either way, and those of us without religion could easily change those results.

We’re not as monolithic as the Religious Right is, obviously, but most of us support church/state separation, abortion rights, marriage equality, science education… I mean, if politicians just gave us lip service on these issues, they’d probably win a bunch of us over. Even if some of us disagree, it’d still be smarter for us to vote for someone who’s closer to our side on these matters:

But John C. Green, director of the Ray C. Bliss Institute of Applied Politics, said that if atheists want a voting bloc, they should look to the evangelicals’ playbook. In the 1970s, evangelicals were as diverse as the nonbelievers are now. Evangelicals disagreed on theology but found common ground in political issues such as abortion and marriage.

“Jerry Falwell didn’t get along with Pentecostals, but they were able to convince their people that for political purposes they could get along,” Green said. “I can see a very similar thing happening with the Secular Coalition and other organizations that are trying to get conversations going with people not involved in organized religion.”

May 29, 2015 A Duggar Family Response to the Child Molestation Scandal, Courtesy of Funny or Die
Browse Our Archives
What Are Your Thoughts?leave a comment