I’ve said before that I don’t mind people who draw images of Muhammad if it’s done for good reason. Standing in solidarity with Charlie Hebdo? Doing it as a symbol of free speech? I could understand and defend those reasons.

Doing it to piss off Muslims or to draw attention to yourself? Now, you’re just being a dick.

Jon Ritzheimer (below) falls in that latter group. 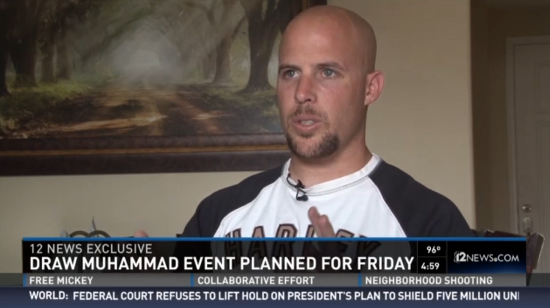 And, just for full jackass-itude, he’s doing it outside a mosque.

The mosque’s leader, to his credit, is saying all the right things:

“It will be the same as every Friday evening and we’re going to tell our members what we’ve told them before: not to engage them,” said Shami. “They’re not looking for an intellectual conversation. They’re looking to stir up controversy and we’re not going to be a part of it.”

I don’t blame him one bit. This isn’t about free speech or having a conversation. If it was, Ritzheimer wouldn’t need to disrupt the prayer services of Muslims in the process.

This is the same atheist, by the way, who was in the news earlier this month for wearing a “Fuck Islam” shirt. He says he’ll be selling those shirts at the event.

I don’t support this event. I hope you don’t either. Ritzheimer has no obligation to listen to me, but I can at least condemn his actions. There’s no higher principle at work here. If there was, he wouldn’t need to resort to these shock-jock tactics. The only thing he’ll accomplish is pissing off Muslims (and plenty of non-Muslims) without creating the conversation he claims this is really all about.

For his sake, I hope the event goes as planned without any drama from outsiders who feel provoked.

(Thanks to @LAWriter for the link)