In the several years I taught at a high school, I ran into a number of religious students. Some of them wanted to talk about religion with me but I did what I could to change the subject. Even if I strongly disagreed with their beliefs, it wasn’t my place to challenge them — certainly not in the classroom.

I suspect most teachers would agree with everything I just wrote. But not James Tillman of Douglas County High School in Georgia. A letter sent to the District by the Freedom From Religion Foundation says that Tillman, upon finding out that a student was an atheist, took it very personally: 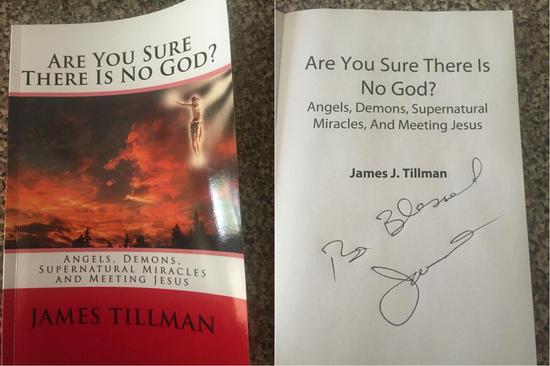 About two weeks later, on May 13, Tillman gave the student two signed copies of a book Tillman had written [seen above] called “Are You Sure That There is No God” inscribed with the message “Be Blessed.”

Tillman also allegedly showed the class a video of him preaching the gospel.

He’s a science teacher, by the way.

He’s also the faculty sponsor of First Priority, a Christian club. That’s perfectly fine, as long as he’s not participating in any meaningful way. Given the way he acts in class, the FFRF says the District should also investigate his involvement with the group.

If all of this is accurate, it’s both incredible and not-very-surprising at all. I can’t believe a teacher would push his faith onto a student who disagrees with him… and yet are any of you surprised to hear of a Christian teacher proselytizing in the classroom?

… “As you are aware, it is inappropriate and unconstitutional for teachers to use students’ time at school to promote their personal religious views,” wrote FFRF Attorney Madeline Ziegler. “Tillman’s imposition of his religious beliefs on a classroom of students is an unconstitutional endorsement of religion over nonreligion, and his overt attempt to convert our complainant’s child to Christianity is inexcusable.”

“Public schools should strive to be welcoming to families of all faiths and non-faith,” said Ziegler. Tillman’s actions “turned our complainant’s child and other non-Christians into outsiders at their school.”

Damn right. I hope they get a satisfactory response from the administration.

This is the same District, by the way, in which a (different) high school football coach had a Team Pastor on the roster. That issue was later resolved after FFRF looked into it.

May 28, 2015
Caught on Camera: Maine Church Gets Struck by Lightning
Next Post