Christian Pastor Claims to Resurrect Man from the Dead, but Man’s Sister Tells a Different Story May 28, 2015 Hemant Mehta

Christian Pastor Claims to Resurrect Man from the Dead, but Man’s Sister Tells a Different Story

This story has been messing with my head for the past several days for reasons you’ll understand in a moment, but I figured I should go ahead and post this now.

Pastor Robby Dawkins — no relation to Richard — was preaching in England several weeks ago when he saw something horrifying just as he took the stage: Matt Catlow, a member of the congregation, began twitching and convulsing. His pupils dilated. His pulse stopped. His mother was screaming for an ambulance.

According to an article on the Christian website Charisma, that’s when Dawkins took action:

“His lips turned from purple to blue-black. It turns out there was a doctor right beside me and he started praying with me,” explains Dawkins, pastor of Vineyard Church in Aurora, Illinois [Note: That’s not accurate. Dawkins preaches in a different part of the state. — HM]. “Several people started gathering around. We laid him on the floor and began to rebuke the spirit of death.”

Suddenly, Dawkins says, Catlow’s color started returning and his breathing was less labored. He started rolling back and forth and then did something he couldn’t do before the episode — he spoke. Past strokes had left Catlow unable to speak but he was not only raised from the dead, his speech was fully restored.

In short, Dawkins says he brought Catlow back from the dead. (Well, actually God did it, he said, but that won’t stop him from taking credit.)

He even made a video with “eyewitness” testimony:

Isn’t it amazing how an eyewitness can tell us what happened, but no one thought to get out a phone and videotape this “resurrection”? And why is there no paperwork verifying all this from a doctor?

At least I think that’s what she says. This is where the story takes a strange turn.

She created a Facebook page trying to tell her side of the story: 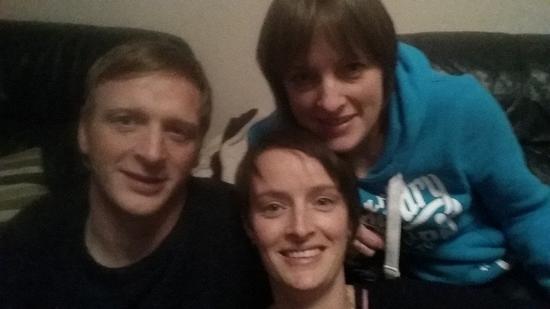 That’s her in the middle with Matthew on the far left.

Yes, her brother had a scary experience at church that day, she says, but he wasn’t dying and he sure as hell didn’t rise up from the dead.

Matthew is my brother and it seems that robby dawkins is in fact feeding people a few twists of the truth. Maybe it sells more books and keeps him more in the public view but as his family are so distressed by what he has been putting on Facebook i am doing what i can to get our story out. We have been blocked from commenting on his Facebook sites and therefore unable to explain our side of events.

Matthew had a stroke about a year ago. Physically he was not effected. His speech and communication unfortunately were effected and although he is 10 times better at communicating than he was a year ago (prior to the meeting, because of all the hard work he has put into re training his brain) Robby saying that his speech is 100% improved is a pure lie. He did not know Matthew before hand and therefore unable to comment on whether his speech had improved or not.

Regarding the ‘death’… what Robby is telling everyone is not true. It has since been MEDICALLY proven that Matthew had suffered an epileptic seizure which often can display similar signs of someone dying. TWO nurse family friends of ours both had their hands on Matthew throughout and not once lost his pulse. So no, Matthew did not die.

The preacher from inglewhite church has been so thrown by all of this that on Sunday just gone he stood at the front of church and apologized to his congregation for allowing Robby into their church. The doctor who was also there is said to be apologizing to them next week for all the pain caused through this unbelievable encounter that he had given and the shock that all this had been broadcast on Facebook by this coward of a man who will not face up to the actual truth.

So… Matthew’s “death” was really just a seizure, and Dawkins is wrong when he says he (with God’s help) saved Matthew.

And it sounds like she’s really trying to tell people her side of the story! I can help her with that! So I reached out to her… and then got mostly stonewalled.

The person running that Facebook page said it was her in the middle of the picture, but she wouldn’t verify that. (I know what it is; I just didn’t get confirmation from her.)

She also said that Catlow wasn’t their real last name and it was misstated everywhere… but she wouldn’t tell what it really was. (I found it; I just couldn’t verify it.)

Then I wanted to speak to the pastor to find out if he actually apologized for inviting Dawkins, but the church still hasn’t responded to my multiple messages over the past few days.

I even reached out to Robby Dawkins, who said he has a doctor’s note confirming his side of the story (that Matthew was dead). He posted it online, I’m told, but quickly took it down to protect the doctor’s privacy. As far as I know, no one has a copy of that note.

While Facebook says Dawkins (or someone in his camp) saw my message, there’s been no response from him at all, either.

Meanwhile, Dawkins is spreading his version of the story as far as he can and perpetuating the story told through Charisma:

A post from 2013 also shows just how badly Dawkins wanted to raise someone from the dead:

Well, he finally got his wish… that is, if you ignore the whole “Matthew wasn’t really dead” aspect of the story. But why would that even matter? His book is selling! He’s like one of those people who went to Heaven and came back to tell us all about it!

There are still a lot of unanswered questions. I think it’s fair to say a dead man did not actually come back to life. I just wish the side trying to tell the accurate version of the story would be more direct in sharing it. I don’t understand why they’re playing coy with me.

May 28, 2015
A Creationist Just Made a Huge Scientific Discovery... Really!
Next Post