An Atheist, Two Pastors, and Sean Hannity Discussed Religious Freedom and It Went Exactly As You’d Expect May 28, 2015 Hemant Mehta

So you know that was entertaining. 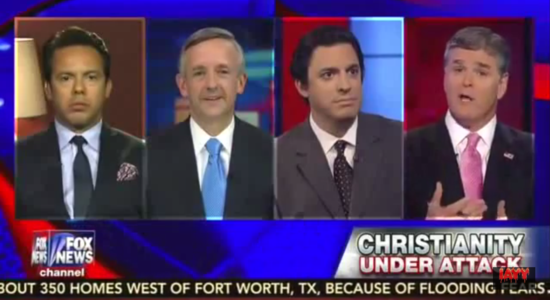 Actually it turned into a shouting match — surprise! — with Silverman trying his best to point out that no one is ever going to force Christian pastors to marry gay couples in their churches. They’re free to be bigots in their religious sanctuaries. It’s only when they step into the public square that they can’t discriminate just because Jesus told them to.

Pastor Robert Jeffress attempted to speak for Silverman, saying that “religion should be free as long as its exercised in the home, the church, or the synagogue.”

… which is absolutely true. You can practice your faith however you’d like privately, provided you’re not hurting people. But no religious group should get to discriminate against segments of the population when they’re part of the public square. Since many religious people can’t be trusted to do the right thing on their own, we need laws to help minority groups that would otherwise be discriminated against.

Pastor Samuel Rodriguez then agreed that this was indeed about bigotry. Bigotry against Christians. Because Christians have it so hard in this country… especially white Christians. Wait. White male Christians.

The struggle is real.

Overall, it’s exactly the type of discourse we’ve come to expect from cable news: One rational voice drowned out by several irrational ones.

All while a graphic reading “Christianity Under Attack” sat in the corner of the screen.

May 28, 2015 Caught on Camera: Maine Church Gets Struck by Lightning
Browse Our Archives
What Are Your Thoughts?leave a comment