The Problem with the #CharlieCharlieChallenge May 27, 2015 Hemant Mehta

The Problem with the #CharlieCharlieChallenge

Here’s how the “Charlie Charlie Challenge” works: You get some paper and make a grid with the words “Yes” and “No.” You put pencils on the axes, one atop of another, so they balance. Then you ask Charlie — a supposed Mexican demon with a very not-Mexican name — any question you want.

If the top pencil moves, it means Charlie is answering your question… 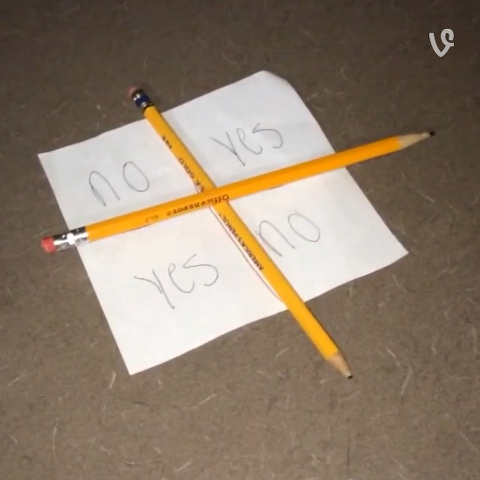 We know how this works.

When you’re really close to the paper, the slightest movement or breath will move that top pencil, even if you didn’t mean to do anything. The whole structure is just unstable enough to make that work. The only force responding to you is gravity.

In a sense, it’s like a modern day Ouija board except your hands aren’t guiding the indicator.

The problem isn’t that so many people are doing it.

It’s that adults — grown, human adults — are freaking out as if kids are actually tempting the devil.

Listen up, folks. It doesn’t matter who made up this game, how, or why. Only a fool would play it, and you should make sure your kids know this.

I was chatting with my husband about how these things are forbidden even if we don’t really believe they will work, and he pointed out that the devil may actually prefer it when people sell their souls lightly. “That’s what the devil wants, even more than satanists,” he said: “Dummies selling their souls as a joke.”

And Dr. Gregory Popcak at Faith on the Couch:

Of course it all sounds like silly nonsense, except that it isn’t and in the mind of a middle school child, this game can be played for rather high stakes. Remember the 2 middle school girls who attempted to murder their friend to appease “Slenderman“? Sometimes child’s play isn’t just stuff and fluff.

If your child plays this game or has played this game, it will be important to go to confession immediately. Letting the devil in the door, even for silly reasons, is never something to take lightly.

Father Stephen McCarthy, the minister at a Catholic high school in Philadephia, sent a letter home to parents:

The letter said: “There is a dangerous game going around on social media which openly encourages impressionable young people to summon demons.

“I want to remind you all there is no such thing as ‘innocently playing with demons’.

“Please be sure to NOT participate and and encourage others to avoid participation as well.

“The problem with opening yourself up to demonic activity is that it opens a window of possibilities which is not easily closed.”

These are the same kind of people who think playing Dungeons & Dragons is wicked and “Light as a feather, stiff as a board” is a real magical spell.

They’re out there in spades. They hold positions of influence. They really think this is a problem… and yet, we’re the crazy ones for pointing out that it’s all bullshit.

Look, kids: play the game if you want. But understand that it’s all in your head, no invisible spirit is listening to you, and it’s ultimately a huge waste of time.

May 27, 2015
Marco Rubio: LGBT Equality Would Lead to a “Real and Present Danger” for Religion
Next Post

May 27, 2015 Atheist Minister May Face "Review" by United Church of Canada Leaders Who See Her as a Heretic
Browse Our Archives
What Are Your Thoughts?leave a comment