Marco Rubio: LGBT Equality Would Lead to a “Real and Present Danger” for Religion May 27, 2015 Rachel Ford

Marco Rubio: LGBT Equality Would Lead to a “Real and Present Danger” for Religion

After decades of vicious attacks on the moral character, mental health, and legal rights of LGBT people, members of the Christian Right find themselves in the position of contemplating a world in which people don’t approve of their views. And it’s terribly discomforting.

Senator Marco Rubio expressed his deep concern over this impending crisis in an interview with David Brody of Christian Broadcasting News. 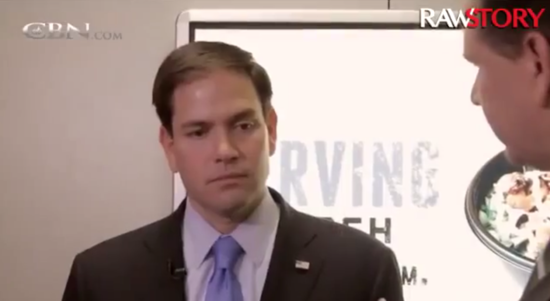 We are at the water’s edge of the argument that mainstream Christian teaching is hate speech because today we’ve reached the point in our society where if you do not support same-sex marriage, you are labeled a homophobe and a hater. So what’s the next step after that? After they’re done going after individuals, the next step is to argue that the teachings of mainstream Christianity, the catechism of the Catholic Church, is hate speech. That’s a real and present danger.

There’s a reason Christian teachings on homosexuality are less welcome in public discourse these days, and it’s not because the secular community and LGBT activists are targeting churches and preachers. It’s because limiting the legal rights of LGBT people for irrational reasons no longer makes sense to most Americans.

If bolstering up archaic prejudices to make Christians feel better isn’t a convincing argument to abandon equality, I don’t know what is!