Wanna know why racism is a problem in America?

Alex McFarland, a conservative Christian radio host, has the answer for you: 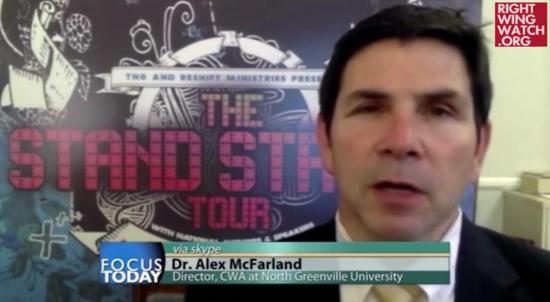 Evolution, for about 75 years, has had a stranglehold on American education, and so the number one reason for racism is belief in evolution.

Yeah, that’s why race-based slavery totally didn’t exist in the U.S. until Charles Darwin came around… I’m pretty sure black and white people lived in perfect harmony until the moment On the Origin of Species was published.

(Side note: It was Martin Luther King, Jr. who once said that 11:00a on Sunday was “the most segregated hour in America.” So it’s not like churches have been paragons of diversity.)

His reasoning, in case you’re wondering, is that the Bible sees all people as part of the same race. If we see different races, it’s only because we’re ignoring the Bible. Yet it’s the political party with strong ties to the evangelical Christian community that’s making it tougher for immigrants to come to this country, and for black people to vote, and for public schools in urban areas to get the support they need.

But, you know, teaching proper science is probably the root cause of all that.

***Update***: I was reminded by @jesnider that a Christian judge who ruled against interracial marriage in the 1960s used this argument (which was later quoted in the Supreme Court decision overturning the ban):

Almighty God created the races white, black, yellow, malay and red, and he placed them on separate continents. And, but for the interference with his arrangement, there would be no cause for such marriage. The fact that he separated the races shows that he did not intend for the races to mix.

May 27, 2015
Missouri Public School District Sued for Taking Students on a Field Trip to a Christian Ministry
Next Post