We’ve known for a while now that Clemson University head football coach Dabo Swinney is a Christian who proselytizes on the job. His players have had baptisms on the field with staff participation. Swinney hired a team chaplain. He sent the entire team to a Fellowship of Christian Athletes breakfast event in 2011. He scheduled devotionals for them.

It’s all illegal. And players who aren’t Christian were coerced — whether Swinney admits it or not — to participate lest they get on the Coach’s bad side. 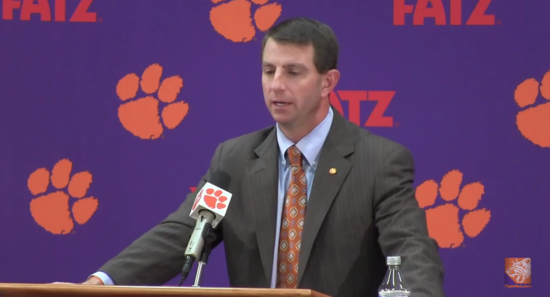 Somehow, Swinney just made it worse:

Clemson coach Dabo Swinney is scheduled to appear at a fundraiser for the Palmetto Family Council, which has drawn the ire of several people who are calling for him to back out of the engagement.

The Palmetto Family Council is a conservative advocacy group that opposes same-sex marriage and abortion.

Keep in mind he’s not appearing as a private citizen but as the Clemson coach. Promotional material on the group’s website even uses the word “Coach” in their marketing:

They mention “Coach Ray Tanner” in that post as a previous award recipient. He’s the South Carolina athletic director. Because that school’s leadership is just full of winners.

It would be bad enough if Swinney did this on his own, but dragging his position and school’s name into it is absolutely unacceptable.

Plenty of people are urging him to say no to the event and the message Swinney would be sending:

“I find it highly inappropriate that Coach Swinney would appear at a fundraiser for an organization that is so openly discriminatory and politically motivated,” House Minority Leader Todd Rutherford, D-Richland, said in a statement. “I cannot fathom why Coach Swinney or anyone else would knowingly assist a group whose mission is to fight against equal rights and equal treatment of others.”

A representative from GLAAD also urged him to decline the invitation:

GLAAD Vice President of Programs Zeke Stokes, a South Carolina native, joined the students’ call for Swinney to withdraw from the event.

“Coach Swinney has an obligation to the players he leads and all students that attend Clemson to use his considerable profile to promote causes that bring us together, not tear us apart,” said Stokes. “The Palmetto Family Council’s values are out of line with the values of love and acceptance for all people, and I hope the Coach will reconsider the message that his aligment with them sends.”

There’s a Change.org petition against the June 2 event:

The Palmetto Family Council has a long history of activism that denigrates and harms LGBTQ South Carolinians. On their website, they “condemn homosexuality and other forms of sexual sin” and call homosexuality “physically, spiritually or emotionally damaging.” They actively oppose marriage equality in the state and have pressured SC schools to drop LGBTQ books from their reading programs. In addition to the direct harms, these views and actions help to create and maintain a culture of hostility to LGBTQ people. As a prominent representative of the University, Dabo Swinney’s appearance and fundraising for the Palmetto Family Council will serve to promote these ideas and actions which harm the mission and goals of the University and the interests of the student body. We, the petitioners, call on Coach Swinney to withdraw from his appearance at the June 2nd fundraiser.

So far, Swinney hasn’t given any indication he’ll say no. Which wouldn’t be surprising since he has a history of pushing his beliefs on others regardless of the diversity of his team. He may say he’s opposed to judging people based on their sexual orientation, but he’s about to promote a group that works 24/7 to ruin the lives of LGBT people.

His actions speak much louder than his words.

(Image via YouTube. Thanks to Jessica for the link)

May 26, 2015
Islamic Strife... Over Whether or Not Muhammad Wiggled His Finger
Next Post