Isaac had criticized some of the Church’s teachings and this trial is his last chance to explain himself. If disfellowshipped, Isaac’s friends and family members still in the Church could be prohibited from ever speaking to him again.

Part four — the final part — of his hidden camera video is now online. 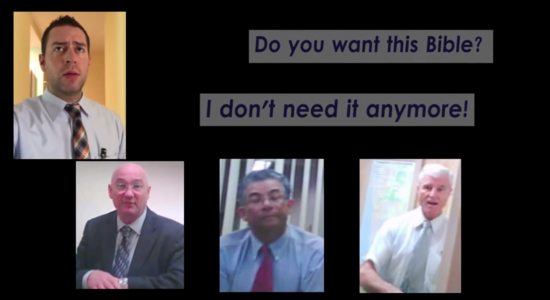 Around the 24:00 mark, Isaac drops the bombshell that he’s an atheist (in the form of a pre-written letter), basically admitting he’s not turning back.

After reading the letter for more than five minutes, one of the elders almost-jokingly says to him, “So you’re not gonna stay.”

And make sure you watch the end of the video for a beautiful montage of former Jehovah’s Witnesses who got out and couldn’t be happier.