The Bentonville School Board in Arkansas is currently debating whether or not to “add sexual orientation and gender identity to the list of protected statuses under the School District’s Equal Employment Opportunity policy.”

You’d have to be a pretty horrible person to oppose that, since leaving it out would allow LGBT teachers to be fired purely on the basis of their sexual orientation.

Unfortunately, some of those horrible people are on the school board. 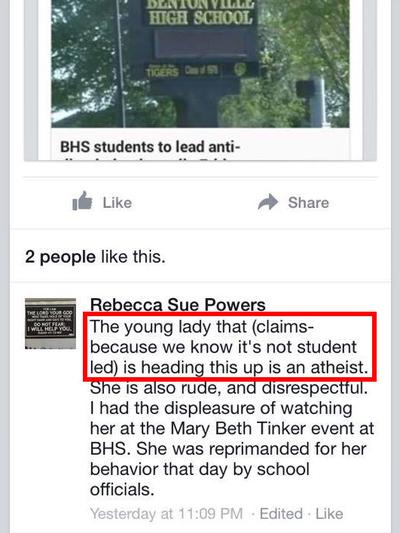 The young lady that… is heading this up is an atheist. She is also rude, and disrespectful. I had the displeasure of watching her at the Mary Beth Tinker event at BHS. She was reprimanded for her behavior that day by school officials.

First of all, what the fuck? What’s wrong with being an atheist? Replace that word with “Jew” and the bigotry becomes apparent.

And why the hell is a school board member attacking a student on social media in the first place? She should be applauding students who are so passionate about a policy issue even if they’re on opposite sides! Most students are so apathetic, they wouldn’t care about this stuff at all.

Also, that student’s mother says the comment about her daughter being reprimanded is just a flat-out lie:

[Paula] Mantel said her daughter [Victoria Mantel] never was reprimanded for her behavior.

“While the statement Miss Powers made is completely untrue and shocking in and of itself, the fact that a School Board member in this district would cyberbully a student in a social media post violates the School Board’s code of conduct and ethics policies,” Mantel said.

A letter sent to the school board by Amy Gillespie, who runs the BPS Citizens for Equality Facebook page, brought up the cyberbullying issue along with a host of other problems:

“The comment was phrased so that the student was easily identifiable and contained personal private details about the student including her religious beliefs and prior disciplinary actions,” according to the letter. “BHS staff told us this post may have even been inaccurate, identifying the wrong student with these details.”

If the post did come from a district officials, it could put the district at risk for litigation, Gillespie and [co-administrator of the Facebook page Gretchen] Bellamy said in an email to the newspaper. They said the post may have violated the Family Educational Rights and Privacy Act by disclosing a student’s official disciplinary record.

“We ask that the board fully investigate the incident according to its procedures and for swift and harsh disciplinary action be taken against Ms. Powers up to and including her removal from the board should she be found in violation,” according to the letter to the board and [Superintendent Michael] Poore.

Since the newspaper revealed the student’s identity, that’s not really an issue anymore, but I can’t get past how childish Powers has to be to publicly trash a student — all because some kids support job protection for their LGBT teachers.

Powers, by the way, made that post on a Facebook page called BPS Protect Our Children — a name that suggests LGBT teachers will somehow harm the kids. (As opposed to people like Josh Duggar…?)

She later responded to media inquiries with the same disrespect she showed in her initial post, denying that she did anything wrong:

Powers said in her email Friday she decided not to comment on the matter, hoping the claim against her wouldn’t become an issue, “out of respect for student privacy.”

“It has, so let me be clear: I personally observed teachers verbally reprimand ‘a student’ for rude and disrespectful behavior that I personally observed at a public event. It is not ‘bullying’ to state an opinion that an unnamed student’s behavior was ‘rude and disrespectful,’ or to comment on potential motivations for that behavior,” Powers wrote.

In other words, she’s defending her bullying of a child by saying it’s totally not bullying if it’s true.

My unborn child has more maturity than that.

She eventually apologized… but not for what she said. Just for making the post public when it should’ve been private (as if that would make it any better):

She added her post was never intended for public display, but was inadvertently posted where it could be seen by others beyond those for whom it was intended.

“My comment was meant only for private discussion, and was inadvertently posted in a public group instead,” she wrote. “However, I am sincerely sorry that these remarks became public, and I sincerely apologize for any hurt this has caused to any student who believes I was identifying them.

So she didn’t apologize for being a horrible person. She was just sorry she didn’t click the right Facebook settings.

Wait, it gets worse:

“As usual in debates about homosexuality and cross-dressing, when these divisive issues are forced on school boards by those who wish to normalize harmful behaviors to impressionable children, supporters of these categories make accusations of ‘bullying’ when confronted by the truth,” Powers wrote.

She’s referring to the “harmful” behaviors of educated professionals whose sexual orientations she doesn’t understand or accept.

The board hasn’t voted on the LGBT-inclusion policy yet, but it will be discussed at their June meeting. It appears, however, that a majority of the board members are opposed to the policy change. Even for Arkansas, that’s disappointing.

For now, if you want to show your support, follow the BPS Citizens for Equality page for more information.

I’ve reached out to Victoria Mantel to see how she’s doing and will post an update if/when I hear back.

***Update***: A source close to this story tells me that Victoria, the student, is not an atheist. The headline of this piece has been changed to reflect that.

May 24, 2015
Here's Part Four of a Secretly-Videotaped Jehovah’s Witness Apostasy Trial
Next Post

May 24, 2015 Neil deGrasse Tyson Shares His Time Travel Preference
Browse Our Archives
What Are Your Thoughts?leave a comment