U.S. Air Force Leader Preached Christianity at Prayer Event, So Why Hasn’t He Been Punished Yet? May 22, 2015 Hemant Mehta

U.S. Air Force Leader Preached Christianity at Prayer Event, So Why Hasn’t He Been Punished Yet?

On May 7, Air Force Major General Craig Olson spoke at a National Day of Prayer Task Force event in Washington, D.C. This would be fine as a private citizen, but he did it in uniform, violating his own branch’s regulations. 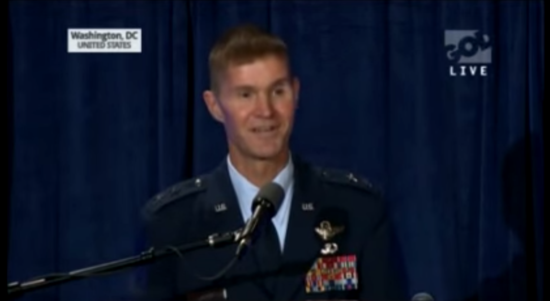 Leaders at all levels must balance constitutional protections for their own free exercise of religion, including individual expressions of religious beliefs, and the constitutional prohibition against governmental establishment of religion. They must ensure their words and actions cannot reasonably be construed to be officially endorsing or disapproving of, or extending preferential treatment for any faith, belief, or absence of belief.

In addition to breaking the law, it was also a really bad strategic move. Chris Rodda points out on YouTube that the speech “was streamed around the world by GOD TV, handing our enemies like ISIS some great material for recruiting propaganda on a silver platter.”

For these reasons, the Military Religious Freedom Foundation sent a letter to General Mark A. Welsh III, the Chief of Staff for the United States Air Force, calling on him to punish Olson:

… on behalf of itself and its over 41,000 active duty and veteran armed forces clients, the Military Religious Freedom Foundation (MRFF) hereby demands that Major General Craig S. Olson be immediately, aggressively and very visibly brought to justice for his unforgivable crimes and transgressions via trial by General Courts Martial and that any and all others who assisted him with his NDPTF speech of fundamentalist Christian supremacy be likewise investigated and punished to the full extent of military law.

So far, no punishment has been handed down, nor is there any sign that Olson will even get a slap on the wrist.

Commenters everywhere are whining about how MRFF is trying to attack Christians or how they hate religious freedom — but they have no clue what they’re talking about. Olson’s Christianity isn’t the issue. Olson preaching his faith while speaking as a representative of the U.S. military is. The same rule would apply to any military official promoting any faith (including atheism).

I would also add that MRFF isn’t a group of atheists. Most of its members are Christians who are sick of military leaders abusing their positions and proselytizing to others.

The fact that nothing seems to be happening to Olson — and that the military seems to be ignoring this issue altogether — shows you just how easy it is for Christians to break the law in the country, even when working for the government. If a Muslim or atheist did the very same thing Olson did, you can bet that person wouldn’t get off scot-free, much less continue to be in a position of power.

May 22, 2015
The Clinic Josh Duggar Attended Was Started by a Man Accused of Sexually Harrassing Dozens of Women
Next Post