The Parents Television Council is one of those activist groups that complains about television shows that don’t meet their specific set of standards. It’s the same group responsible for generating the biggest freakout following Janet Jackson‘s exposed nipple during the 2004 Super Bowl. (Because kids who are accidentally exposed to a half-second nip-slip will be scarred for life.)

PTC just released a report decrying some jokes made on Family Guy: 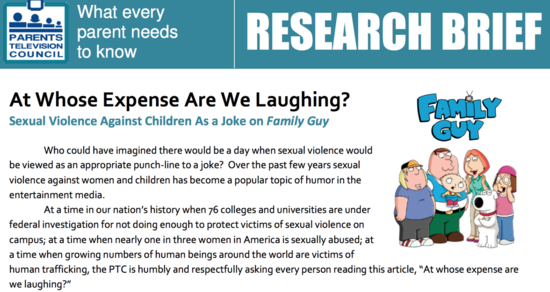 Rape, incest, pedophilia, sex trafficking, sexual abuse and other of humanity’s most horrific crimes are far-too frequent occurrences in today’s society. Why would we ever want to be in the position of laughing at humanity’s worse offenses to children? As media commentators and advocates for a safer entertainment media landscape for children, the PTC cares deeply about the potential impact to millions of children who consumed these Family Guy jokes and who may become desensitized to, or who will trivialize real-life consequences of such conduct.

Meanwhile, just a week ago, they were promoting 19 Kids and Counting:

(Side note: Full House and Hogan’s Heroes? Really? They’re really up with the times, these people…)

I realize it’s not fair to criticize PTC for promoting the show before the Josh Duggar child molestation story broke, but the question is whether groups like this will say anything about the show now. Will it ever again be a Pick of the Week?

But a show starring an actual child molester? Well, that’s just fine to them.

May 22, 2015
U.S. Air Force Leader Preached Christianity at Prayer Event, So Why Hasn't He Been Punished Yet?
Next Post