Mike Huckabee: Even Though He May Have Fondled Little Girls’ Breasts and Vaginas, I Still Support Josh Duggar May 22, 2015 Hemant Mehta

Mike Huckabee: Even Though He May Have Fondled Little Girls’ Breasts and Vaginas, I Still Support Josh Duggar

In a statement released on Facebook this afternoon, Republican presidential candidate Mike Huckabee expressed his support for Josh Duggar, despite allegations that he molested five girls (including his own family members, while some of them were asleep). 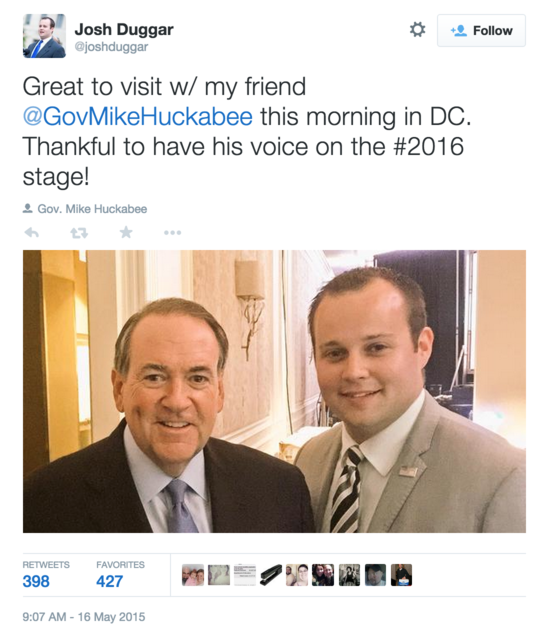 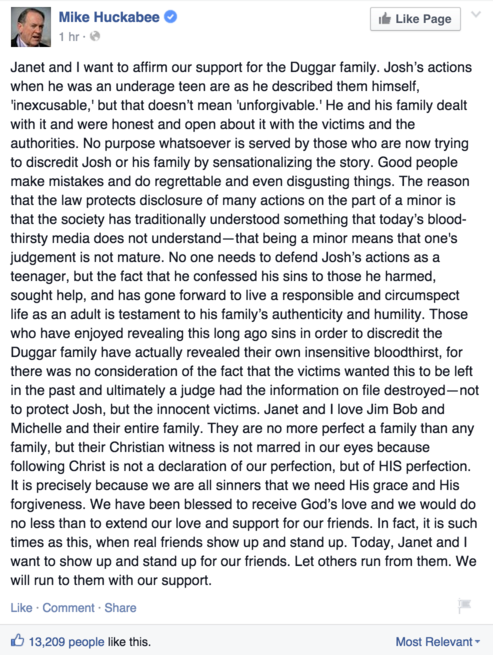 Janet and I want to affirm our support for the Duggar family. Josh’s actions when he was an underage teen are as he described them himself, ‘inexcusable,’ but that doesn’t mean ‘unforgivable.’ He and his family dealt with it and were honest and open about it with the victims and the authorities. No purpose whatsoever is served by those who are now trying to discredit Josh or his family by sensationalizing the story.

But the family wasn’t honest and open about it. Jim Bob Duggar didn’t even report the crimes to police for a full year after he first knew about them.

And there absolutely is a purpose to talking about it. The victims need to know they won’t be ignored, and others like Duggar who may be committing a similar crime need to know this isn’t something you can just sweep under a rug.

Leave it to a True Christian™ like Huckabee to cast more blame on those writing about this story than the guy accused of child molestation. He forgives Duggar because Duggar forgave himself, through Jesus. Nothing else matters in their twisted logic. Plus, you know, he wasn’t 18 yet, so his actions don’t really matter:

The reason that the law protects disclosure of many actions on the part of a minor is that the society has traditionally understood something that today’s blood-thirsty media does not understand — that being a minor means that one’s judgement is not mature. No one needs to defend Josh’s actions as a teenager, but the fact that he confessed his sins to those he harmed, sought help, and has gone forward to live a responsible and circumspect life as an adult is testament to his family’s authenticity and humility.

Actually, Duggar didn’t seek help; he spoke to an untrained counselor and did some manual labor as “penance” for his crimes.

That might get you a reprieve in church, and no one’s saying Duggar needs to be punished as an adult for a crime he committed as a minor, but Huckabee spends more time defending the molester than he does speaking out against the crime.

Look at the words Huckabee uses to describe Duggar’s actions: They were “mistakes” that were “regrettable and even disgusting.” Huckabee can’t even bring himself to use the words molestation or crime — or anything like them.

Just ask yourself: If we were talking about a prominent gay person and not a fellow conservative Christian, would Huckabee be speaking about this the same way? Of course not.

Hell, he criticized the Obamas more for allowing their children to listen to Beyonce.

Josh Duggar’s been given a pardon from a man whose judgment in this situation shows why he’s completely unfit to be President.

May 22, 2015
Catholic Priest: Atheism Sucks Because the Godless Don't Have Cool Hats Like Religious People
Next Post