Earlier this month, I posted about how the Jehovah’s Witnesses were losing money. One of its leaders made a pitch for followers to give the Church all their “valuable things.”

In their latest propaganda video, the Church shows a little girl choosing between buying ice cream for herself… or donating that money to a church.

There’s only one way this commercial can end: 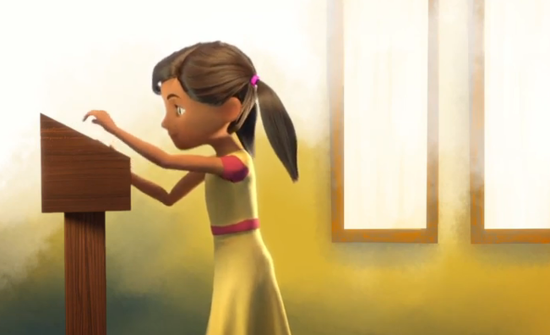 Lloyd Evans, a JW watchdog, holds little back in his contempt for these religious leaders:

Going without an ice cream so that Watchtower can balance its books clearly pales into insignificance compared to the prospect of being shackled to a cult for life under threat of being estranged from your family. But at least by churning out such ill-advised and clearly exploitative child propaganda material the Governing Body is showing its true colors for those old enough to think for themselves.

Despite styling itself as “the faithful and discreet slave,” the Governing Body is proud to be taking ice cream money from the hands of young children, and has thus revealed itself to be just as cheap and shameless as any other tawdry group of televangelist swindlers.

Hear hear! The moment you have to rely on the innocence and goodwill of children to boost yourself — something the Creation Museum does all the time — it’s a sign that you have nothing of substance to offer adults who can think for themselves.

May 22, 2015
Sam Harris' Next Book, About Islam, Now Available for Pre-Order
Next Post

May 22, 2015 Christian Blogger: Josh Duggar's Critics Are Hypocrites Who Didn't Care When Lena Dunham Touched Her Sister
Browse Our Archives
What Are Your Thoughts?leave a comment