Egyptian Cleric: Atheists Shouldn’t Be Allowed to Talk About God Unless They’re Outside the Country May 21, 2015 Hemant Mehta

Egyptian Cleric: Atheists Shouldn’t Be Allowed to Talk About God Unless They’re Outside the Country

Egyptian cleric Khaled Al-Gindi said on Al-Hayat TV earlier this month that atheists had the right to their beliefs… as long as they remained silent while in the country. Anything less was a “provocation” (of what, he didn’t specify). 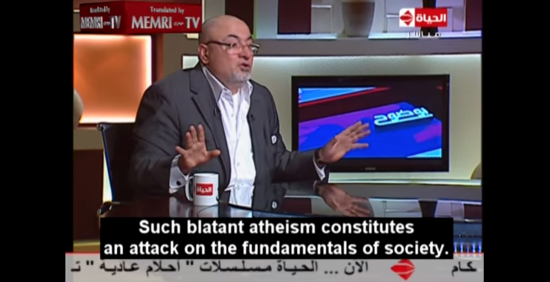 A bit over the top, don’t you think, for a country that says it’s home to only 866 atheists?

(via MEMRI TV. Thanks to David for the link)

May 21, 2015
They Could Hang This Poster at the Creation Museum
Next Post

May 21, 2015 Rape and Incest Exemptions to Abortion Are Just "Political" Concessions, Says Anti-Choice Leader
Browse Our Archives
What Are Your Thoughts?leave a comment