In the darker corners of the Internet, there’s a place called BiblicalGenderRoles.com, run by an anonymous self-described conservative Christian man in his early forties, who apparently just happens to have a hotline to the Almighty on these issues.

It’s a one-stop shop for your daily dose of Biblically-framed misogyny. Or, apparently, to find answers to rape-y questions, like, “Is a husband selfish for having sex with his wife when she is not in the mood?” 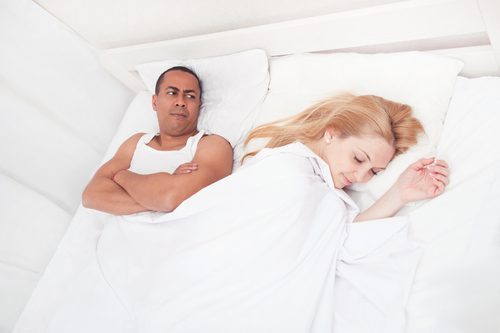 The post in question is part of a series (ironically?) titled “How to be a good husband.” To give you an idea of what we’re dealing with, the previous post very usefully addressed how Christian husbands must remember: “you don’t pay for the milk when you own the cow!”

And in case you think “own” is used in a figurative sense… well, not so much. This is the author trying to explain how non-offensive the use is:

A quick word on the “cow analogy” before we continue — in no way am I meaning disrespect toward women, or saying that cows are somehow equal to women, or that women are less human than men. But Biblically speaking, a wife does belong to her husband (men paid a “bride price” and one the terms for husband in the original languages of the Bible is “baal” which means “owner or master” (e.g. Proverbs 31). I Peter 3 says “Sarah obeyed Abraham, calling him lord [master]”.

Well, glad that’s cleared up: you’re not an animal, just a possession.

He spends much of that post instructing men how to discipline their “rebellious” wives, who may not want to have sex with them, with scripture. (While the Almighty’s humble messenger advocates plenty of righteous browbeating, he does not condone beating in any other sense.)

He also poses a question that really doesn’t sound like the sort of thing a non-rapist would ask:

Can my Christian wife ever say no to my sexual advances?

This is the logical question you as a Christian husband (or engaged man) might ask after everything we have just looked at. The answer to this question is a Christian wife should never give her husband a flat no, BUT she can humbly and gently ask for a delay. There may be legitimate physical or other issues that might prompt your wife to ask you for a delay. But this must be done humbly and respectfully, and always with the attitude in mind that her body does belong to her husband. But a Christian wife should ALWAYS make good on her “rainchecks” with her husband. Also these “delay requests” from wives should be the exception, and not the normal response to a husband’s sexual advances.

The author emphasizes in the next post that he would never advocate forcible rape. But he preaches that a woman literally has no legitimate right of refusal; her consent is a given simply by marrying. If she doesn’t want sex, and her reason is “legitimate,” the best she can do is “humbly ask for a delay”.

Without consent, you have rape — whether it’s forced or coerced through other means. The author is advocating marital rape, going as far as to pretend that a woman does not have the power to consent or the right to refuse.

While he briefly touches on it in this article, it’s in the next piece that he lays out his argument that a husband should proceed to have sex if religious coercion yields even grudging acquiescence, despite the fact that his wife may be unhappy about it.

But this isn’t advocating rape, he says:

I have not, nor would I EVER advocate for a husband to force himself physically upon his wife or to physically abuse her in any fashion. The issue being discussed here is about whether a man should take sex from his wife IF and ONLY IF she yields to his request for sex, even though she does so grudgingly and is not really in the mood, or does not feel he has earned it.

The author may well believe that the line in the sand between rape and all other intercourse is the use of physical force (although, as we’ll see in a bit, he’s very clear that it’s not possible for a husband to rape his wife, no matter what he does). But he proceeds to write an entire article telling men exactly how they should force their wives to give in, and why a woman does not have a right to refuse her husband.

There are many types of coercion, the physical kind being just one. If a husband is forcing his wife to give into his sexual advances against her will, and “taking” sex from her despite the fact that she’s unwilling, frankly, that’s rape.

While the author dislikes physical coercion, his recommended tools are religious and emotional coercion. Quoting from 1 Corinthians, he writes,

(It’s worth noting that he mentions the fact that the same scripture gives the same rights to the woman, but his focus is on how the “good husband” should extract sex from the unwilling wife.) At least he anticipates that what he’s saying isn’t going to sit well with everyone:

The haters of the fact that God says sex is to occur if either the husband or wife want it will immediately scream “Rape” when I tell you as a Christian husband, that you ought to take the sex from your wife even if she is not in the mood.

The little phrase they neglect that I have stated is “if she yields”.

The inclusion of the phrase, complete with instructions on how to coerce a “yield” from an unwilling and unhappy partner, doesn’t really do much to improve the situation: you’re still pressuring her, essentially swapping out a threat of immediate punishment for a threat of an eternal one, and “taking” sex from a person who doesn’t want to have sex with you.

In other words, rape.

And, just in case there’s any doubt, he doubles down on the Biblical non-existence of marital rape:

I am NOT advocating for a husband to physically force his wife to have sex with him.

But I will say this, despite American laws to the contrary, Biblically speaking, there is no such thing as “marital rape”. In the Scriptures, the only way rape occurs is if a man forces himself on a woman who is not his property (not his wife, or concubine). A man’s wives, his concubines (slave wives taken as captives of war or bought) could be made to have sex with him, no questions asked.

Now the Bible states that if a man did take one of his female slaves, he had to make her at least a slave wife (a concubine), which gave her a certain status above a normal slave. She had the right to be fed, clothed and the right to regular relations with him even he had other wives. She also had to be given the full rights of a daughter, if her father-in-law had purchased her for his son. I realize this entire scenario is appalling to our modern western notions, but I choose to not challenge God’s wisdom in the laws he gave. If you want to argue with God about this at the judgement, be my guest.

Of course, claiming not to advocate for marital rape while preaching the need to follow God’s laws and “choos[ing] to not challenge God’s wisdom” on the legitimacy of husbands raping their wives is pretty dishonest. But he’s not wrong insomuch as the Bible does say this. On the other hand, by rationalizing a way to rape, he’s failed a basic moral test that most people nowadays, Christians included, have passed. And rather than admitting that he advocates marital rape, the author simply pretends it can’t happen — that rape isn’t rape if it happens between married people.

Even applied in moderation, this is bad advice. In excess, it’s terrible. If the most convincing reason for married people to be intimate is that God wants lots of sex in a marriage, that’s probably a marriage in trouble. And if a spouse is genuinely coercing his partner to “yield” to intercourse against her will and “taking” sex from his unwilling wife, that is rape. There’s no disclaimer big enough to get around what this post is advocating.

May 21, 2015
Boy Scouts of America President Says Ban on Gay Leaders "Cannot Be Sustained"
Next Post

May 21, 2015 They Could Hang This Poster at the Creation Museum
Browse Our Archives
What Are Your Thoughts?leave a comment