At any other prom, it wouldn’t have been a big deal for David Leix to wear his grandfather’s kilt in honor of his Scottish heritage.

But David attended “Praise Prom,” which is for Christian home-schoolers. Organizers thought he was wearing a skirt, so they banned him from entering until he came back wearing dress pants, forcing him to miss hours of what was supposed to be a wonderful memory: 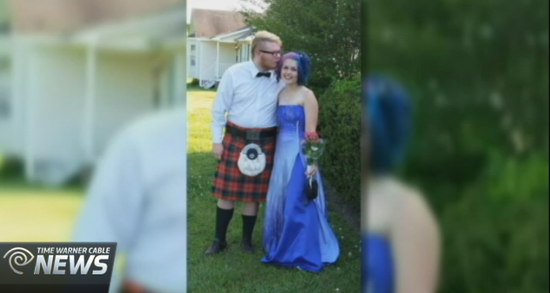 Now, the organizer is doing damage control, saying she had no problem with his heritage. It’s just, you know, the length.

I guess he was showing too much skin in that picture.

Traci Lanphere, the director of the Praise Prom, released a statement saying that Leix’s denied entrance was simply due to the fact he did not wear dress pants, which were required.

“If you’re not letting him in because of the length, then you think it’s a skirt, versus him not wearing a pair of pants,” [mother Hilary Leix] said.

Lanphere issued a statement in response… which didn’t help at all since she never actually explained what was wrong with the kilt:

We want to keep things about Jesus, and keep things very simple and straight forward. We support people who want to celebrate their special heritages, and suggest that David and his Mom perhaps create a special heritage night or dance. I’m impressed with David and his energy, creativity and enthusiasm to go to such lengths to convince us to change our policy. I celebrate with him the freedom we have in this country, and exercise mine, as I stand firm in our policy of dress pants, dress shirt and tie only for boys at the Praise Prom.

Translation: Boys wearing skirts aren’t allowed at my Jesus Dance. This punk was just trying to piss me off.

Translation: I never called his kilt a skirt! I just thought it! And that’s why boys wearing skirts aren’t allowed at my Jesus Dance.

In case you’re wondering, this is what the dress code for boys actually says:

You may enjoy wearing a tuxedo, but it is not necessary for this event. Dress pants, shirt, and tie are perfectly acceptable. Avoid jeans, shorts, sagging pants, or t-shirts.

Hell, by that logic, David could’ve worn an evening gown and technically been okay.

That same etiquette policy also tells girls not to show any cleavage no matter their body type, that it’s disrespectful for them to say no to any guy who asks them to dance, and that “no close slow dancing is permitted.”

There’s actually no explicit ban on gay or lesbian couples anywhere on the website… though I’m guessing that, like the kilt, it’s another one of those unspoken rules that you’re just supposed to know.

Lanphere refunded David the $60 he spent on his ticket. Not that that will erase the memory of how she ruined a once-in-a-lifetime dance for him. (His date’s ticket wasn’t refunded even though, I suspect, her night wasn’t full of happy memories either.)

She plans to change the dress code policy for next year.

May 21, 2015
Faith-Healer Adam Miller Drops Lawsuit Against YouTuber Calling Him Out on His Claims
Next Post