On the latest episode of The Atheist Experience, Matt Dillahunty and John Iacoletti took a call from a gentleman who wanted to present an argument against presuppositional apologist Sye Ten Bruggencate. The discussion led to Matt making an off-the-cuff zinger that deserved a bigger laugh than it got. 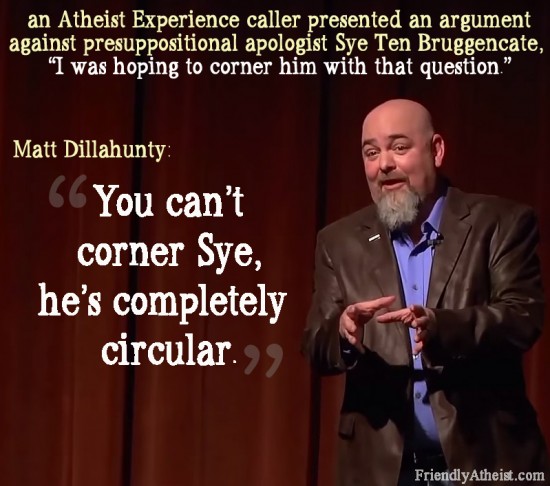 If you want to hear the joke in its natural habitat along with the full caller question, it’s episode #918.

Last summer, as you might recall, Dillahunty debated Bruggencate. It was a rather unfortunate experience for Sye, but Dillahunty’s effortless victory is still a buzz with his show’s callers (even if he seems kind of over the topic himself).

May 20, 2015
Happy Sixth Everybody Draw Muhammad Day!
Next Post

May 20, 2015 Thanksgiving Dinner Will Be Extra Tasty This Year
"Will someone please explain to these legislators what their job description is? I'm pretty sure ..."
Ann Kah Arkansas State Senate Unanimously Passes “Day ..."
"And here I was thinking the 2nd amendment was the most sacred."
Jezebel'sOlderSister Religious Liberty Shouldn’t Be More Sacred ..."
"Much more recently I'm sure all of them got their designated shots when they were ..."
Wattle Preacher Whose Parents Caught COVID Says ..."
"Funny, but I can't remember the word 'sacred' appearing anywhere in the US Constitution.Not only ..."
NOGODZ20 Religious Liberty Shouldn’t Be More Sacred ..."
Browse Our Archives
What Are Your Thoughts?leave a comment