Today is the sixth annual Everybody Draw Muhammad Day — a celebration of free speech in which artists refuse to let religious extremists dictate what they can and cannot draw. After everything that’s happened this year with Charlie Hebdo, the event may be needed more than ever. (Preferably without Pamela Geller around.) 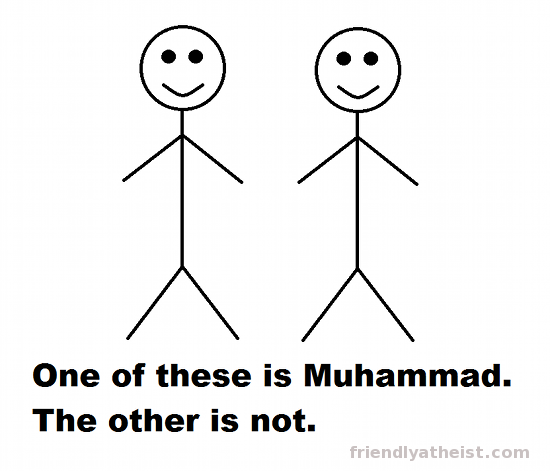 For a couple of years, I hosted your pictures on this site (sorry for the now-messed-up formatting). It’s a lot of work and I just didn’t get around to it this time around, but I thought there was a more interesting conversation about the event taking place elsewhere on Patheos.

A group of bloggers — including atheists, Muslims, and ex-Muslims — discuss the issue of how to talk to your kids about this topic. It’s fascinating to read.

Ryan [Bell of Year Without God]: “You’re not a Muslim so those rules don’t apply to you. You are free to draw a picture of Muhammad if you want to. But some people might get upset. You should understand how seriously some people take that. It would be like one of your classmates making fun of me. You’d probably feel very hurt and upset by that. That’s how some people feel when people draw Muhammad, especially when they want to make fun of the Muslim religion.”

Qasim [Rashid of Islam Ahmadiyya]: “Before you draw anything or anyone, you should ask yourself a few questions. Will I help people feel better with my drawing? Will my drawing show how much I love someone, or will it make them think I don’t like them? As you live your life, remember that there are plenty of things you can do, but maybe shouldn’t, because doing them might make others feel bad and might make you look mean. Don’t only ask if you can or can’t do something. Instead, ask if you should or shouldn’t do something. If your actions will help create love and peace among all people, then it is probably a good idea and you should go on and do it. But if your actions will create anger and hurt among people, then you should think twice.”

You don’t have to agree with all of it — I don’t — but it’s the sort of discussion we should be having on this topic. It goes beyond the question of whether we have a right to draw Muhammad — of course we do — and focuses on making sure we understand the implications of what we’re doing.

You can draw Muhammad, but I think you should at least know what effect it’ll have on Muslims who support that right before you do so.

And if you’re going to draw something crude, you should have a good reason for why you’re not drawing something more innocuous. Just to be a dick? Or because you’re trying to make a larger point?

It’s a great discussion. Hats off to Wendy Thomas Russell for compiling the responses.

In any case, if you’re participating in the event, you have my support. You may also want to enter the contest that Atheist Republic is holding.

May 19, 2015
The Guardian Shines a Light on Muslims Who Become Atheists
Next Post