Christian Pastor Who Preached Against Same-Sex Relationships Caught Trying to Hook Up on Grindr May 20, 2015 Hemant Mehta

The Ted Haggard Rule — I assume that’s a real thing — goes like this: No one cares about your sex life. But if you publicly oppose the very thing you’re doing in private, then that shit deserves to be blown up.

So when you’re Reverend Matthew Makela of St. John’s Lutheran Church and School in Midland, Michigan, and you post things like this about the LGBT community on Facebook… 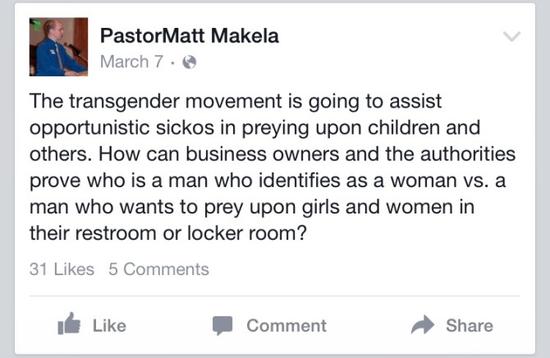 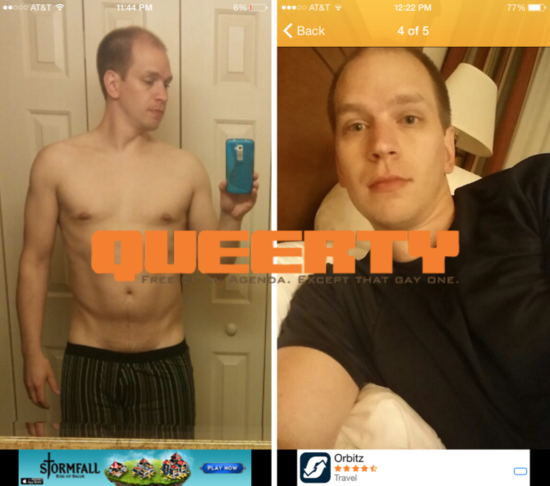 … then the guy you’re sending them to may just pass them along to an LGBT-friendly website so they can out you.

Queerty got the scoop along with additional information:

… The married father of five from Midland, Michigan doesn’t just preach Jesus’ love and help with bake sales. He also uses his position of authority and respect in his community to broadcast his self-loathing view on same-sex attraction.

In November 2014, a fellow Midland man of God, Pastor Dan Dickerson, wrote an op-ed titled A Stand For The Truth which reads in part:

Makala [sic] can be found in the comments section (UPDATE: his comments were deleted after this story was published) thanking Dickerson and echoing his view:

“Thank you, Pastor Dickerson, for believing the Word of God and loving people enough to reveal God’s will for their lives and also His plan of salvation for all believe in Jesus… I love people who have same sex attraction, and so does God. The proof is in the sacrifice He made for all of us who sin… We don’t tell a person born with tendencies to abuse alcohol to keep on giving in to his innate desires because he can’t help it. We try to help him in his struggle.”

Makela resigned soon after he knew his secret was going to be exposed.

In a stunningly tone-deaf letter posted on the church’s website, Senior Pastor Daniel Kempin explained to the congregation that “sin” took place — without going into any details — before blaming unnamed “malicious” people for trying to “do harm” to the church. Kempin also explained that he disabled the church’s Facebook page (and Twitter account) so people wouldn’t post anything on there.

Basically, the genie is already out of the bottle and Kempin is doing everything he can to keep church members in the dark.

Because telling the truth goes against what these Christians believe.

I write this to you to warn you that you may be confronted with the details of the sin, and to remind you that sin is never pretty. The facebook pages associated with St. John’s have been taken down in an attempt to remove the opportunity for malicious posters to have access to St. John’s members, but the internet and age of communication being what it is, I have no way of guaranteeing that you will not come across this information in some way.

It’s as if Kempin wanted to keep this secret under wraps more than Makela did. He believes ignorance is the best path forward for his congregation — that’s how little he thinks of him.

There is no apology on the site.

No explanation of what happened.

No mention of the word “hypocrisy.”

And certainly nothing about how Makela likes to “make out naked” or “cuddle” with other men, or how he flirts with them on Grindr while denouncing same-sex relationships. (Maybe he should’ve read the anti-porn resources on the church’s website.)

I don’t care to rub it in. I just want to make sure the congregation, if they’re reading this, understands the hypocrisy taking place in this church that they support with their pocketbooks.

May 20, 2015
Judge Rules in Favor of School District Holding Graduation in Church and Including Christians Prayers in Ceremony
Next Post