14 Lessons from a Conservative Christian Couple’s Book About Dating and Sex May 19, 2015 Hemant Mehta

Last month, I posted a list of 11 lies about homosexuality from Tim LaHaye‘s 1978 book The Unhappy Gays. (LaHaye later co-wrote the Left Behind series.)

Turns out LaHaye and his wife Beverly also wrote a book all about dating and sex: Against the Tide: Raising Sexually Pure Kids.

So you know I had to check it out. 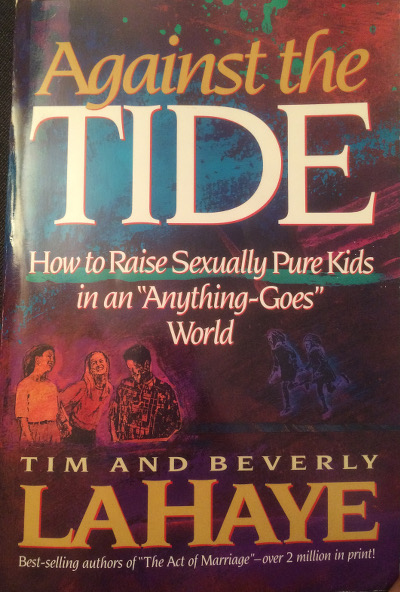 Here’s what I learned:

1. Your greatest achievement as parents will be knowing nobody got inside your daughters’ pants until their wedding day.

Leaning forward she surprised us with the words, “Mom and Dad, you can be proud of yourselves. You raised two daughters in Southern California and both of us were virgins on our wedding day!”

Tears of joy ran down both our faces as we realized that this dedicated Christian young woman of twenty-four had set the goal many years before to be a virgin bride, and she had achieved it.

2. Only losers have sex before marriage.

Saying yes to premarital sex does nothing for one’s character. It weakens one’s resolve, unleashes adult passions in a child’s body, and destroys self-esteem through guilt. Young people who say no to premarital sex tend to feel good about themselves and are prone to become winners in life.

3. If you have premarital sex, you may have to kill yourself. But not before giving your kid a sexually transmitted infection.

When I was a teen I had a friend (I’ll call him Phil) whose father, like mine, was dead… his father committed suicide when Phil was four. He could barely remember him. Phil had a scar on the side of his face that he eventually explained was the result of several operations to repair a hole in his cheek. Doctors said it was a birth defect caused by his father’s syphilis contracted before he married. In his youth Phil’s dad “sowed his wild oats” and incurred a sexually transmitted disease that disfigured his son for life. The father’s guilt became so intense he hung himself — a high price to pay for a few minutes of illicit pleasure.

4. When you kids ask you where babies come from, be honest and tell them, “God did it.”

For example, note the difference in the following answers to the childish question: “Where did I come from?” The old answer was, “The stork brought you.” A better answer is, “God gave you to us… and we are very glad He did!” Avoid teaching too much in response to these innocent questions.

5. If you start fooling around in a relationship, it’ll go from holding hands to “necking” to “mutual sex play” to sex to a break-up. It’s the law. 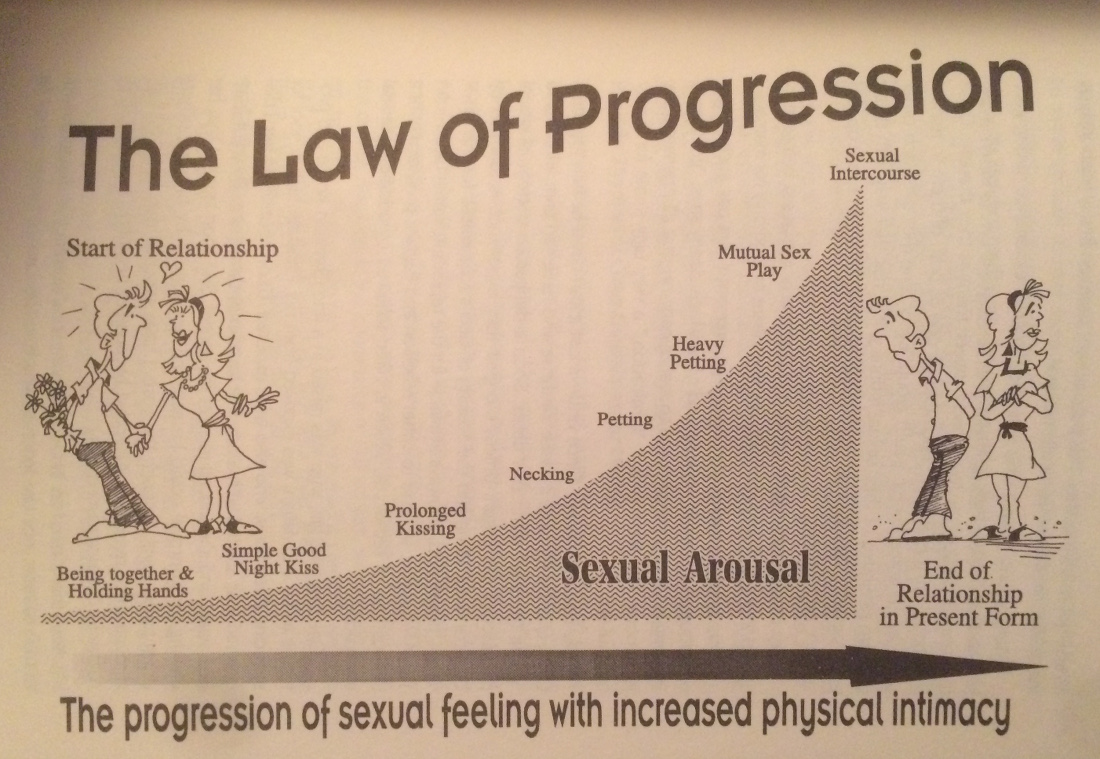 6. Wet dreams are caused by God making too much sperm. Your homemaker mother will tell you all about it when she’s changing your sheets.

The “wet dream” is God’s method of releasing the buildup of sperm and sexual energy in an adolescent boy or in a man. It is easier for a boy to learn about this from his father, but frequently a mother discovers the signs of a wet dreams when changing her son’s sheets. You should reassure your sons that this is very normal and they need not feel embarrassed.

7. If your parents love you, you won’t become a homosexual. Also, lesbians are created by fathers who are angry they didn’t have sons. 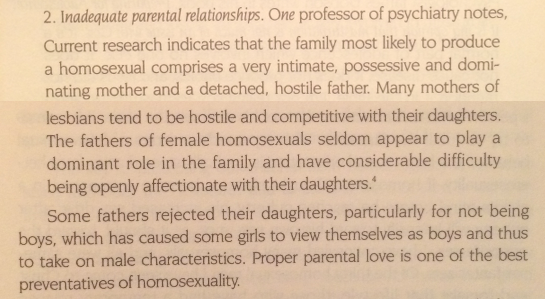 One professor of psychiatry notes, Current research indicates that the family most likely to produce a homosexual comprises a very intimate, possessive and dominating mother and a detached, hostile father. Many mothers of lesbians tend to be hostile and competitive with their daughters. The fathers of female homosexuals seldom appears to play a dominant role in the family and have considerable difficult being openly affectionate with their daughters.

Some fathers rejected their daughters, particularly for not being boys, which has caused some girls to view themselves as boys and thus to take on male characteristics. Proper parental love is one of the best preventatives of homosexuality.

8. We are all homosexuals. Every one of us.

9. Because fathers own their daughters, you have to ask for daddy’s permission before borrowing her. Kind of like a boat.

When a young man dates your daughter, it is serious business; he is going out with one of your most treasured possessions. If a person borrows your car or boat, you would set some guidelines for its use. It is even more important when a young man “borrows” your daughter. This may frighten some prospects away, but they represent the group you want your daughter to avoid. Any boy who lacks the courage to look a girl’s father in the eye when asking permission has no business dating her.

10. When interviewing your daughter’s prospective boyfriend, make sure he ain’t no Jew.

Kevin: “Mr. Petersen, I came over tonight to ask you if I can take your daughter out on a date.”

Father: “I appreciate you taking the trouble to come by for a talk. There are a couple of questions I’d like to ask you, if I may. First, are you a born-again Christian?” If he says yes, you can follow that up with, “Where do you go to church and how active are you in the church?”

Never French kiss! Sooner or later, even among the most wholesome young people who indulge in kissing, one of them will resort to French kissing. This can be very stimulating and, therefore, should be saved for marriage. Rarely will a couple who does not French kiss indulge in sex.

12. Make sure your daughter never lets anyone (except her husband) touch her in “no man’s land.”

Until marriage, all girls should consider the area from her neck to her knees as “no man’s land.” All sensory feelings between those spots of the body point to sexual arousal. Fondling of that area can heighten her emotions and, at certain times of her monthly cycle (particularly the seventy hours of highest fertility) make her so passionate she could lose control of her will. Only one man should ever have access to that area: her husband.

13. A man should never let a young jezebel rape him. If she does, it’s always his fault.

… He may date a girl sometime who is far more experienced than he, who may urge him to go to a remote place to “make out.” He can be polite yet firm only if he has established in advance principles that he will not violate under any circumstances. He needs to be reminded that an aggressive girl or woman is almost impossible for the average man to resist unless he is deeply committed to purity. He alone is responsible for his behavior, and he will bear the responsibility. Girls cannot rape unwilling men; they can seduce them, which only proves that a man who allows himself to get into a bad situation is unwise (Prov. 5).

14. Authors of a pro-abstinence book should really think twice about the title of their closing chapter. 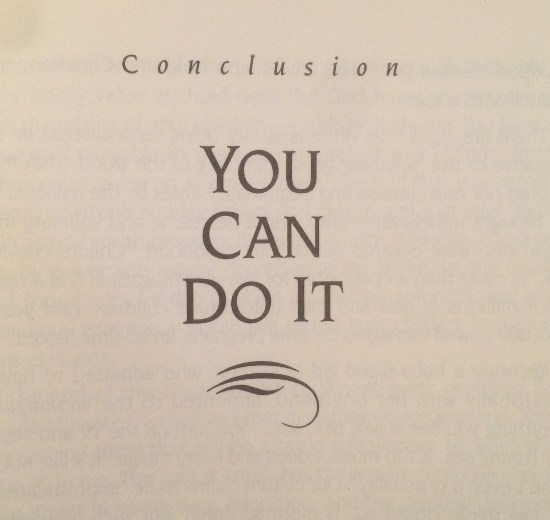 May 19, 2015
A Year After Uncovering Several Church/State Violations at His School, a Student is Suing His Former District
Next Post