South Carolina Governor Calls on Pastors Across the State to Join Her for a Christian Revival May 18, 2015 Hemant Mehta

South Carolina Governor Nikki Haley (below) recently sent a letter to pastors across the state inviting them to attend “The Response,” a prayer rally taking place on June 13. (Similar events have been promoted in the past by Texas Gov. Rick Perry and Louisiana Gov. Bobby Jindal.) 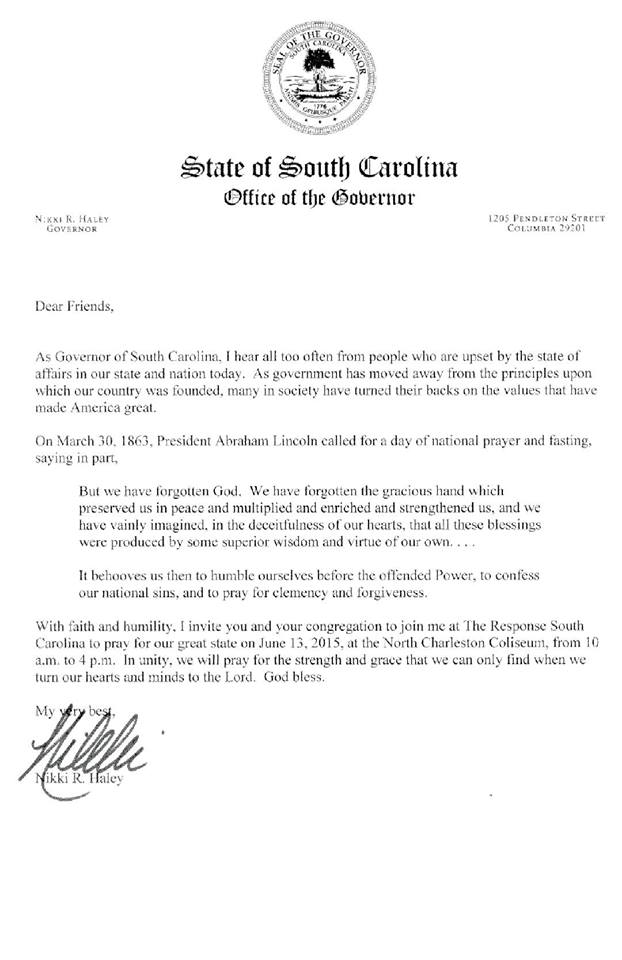 In an excellent opinion piece for The State, Rev. Neal Jones of the Unitarian Universalist Congregation of Columbia explains why he won’t be participating:

I had assumed that this event was for all people of faith, but then I read on “The Response” website that “this is a time for Christians to come together to call upon Jesus to guide us through unprecedented struggles.” So I’m guessing that Unitarian, Buddhist, Muslim, Jewish, pagan and Baha’i South Carolinians are not invited to the North Charleston Coliseum, to say nothing of humanists, atheists, agnostics, skeptics or free thinkers. I realize that the majority of South Carolinians do call themselves Christian, but hey, the rest of us are South Carolinians, too.

But even if she had [invited people of all religious beliefs], I would not attend. I am not against prayer, but I am for the Constitution, the First Amendment of which establishes a “wall of separation between church and state,” to use Thomas Jefferson’s famous phrase.

If Haley or her colleagues were promoting any religion but Christianity, there would be a national uproar. But because she’s in the majority, she feels like she can get away with this. It’s telling that she never says it’s a Christian event even though the official website makes clear that:

This is the time for Christians to come together to call upon Jesus to guide us through unprecedented struggles, and thank Him for the blessings of freedom we so richly enjoy.

The event is even sponsored by the American Renewal Project, a non-profit “whose vision is to move the nation towards Judeo-Christian beliefs.”

Make no mistake: This is a Christian revival promoted by a sitting governor in that capacity. There’s no reason this should be legal. But when you’re a Christian in South Carolina, church/state separation takes a backseat to whatever Jesus wants.

(Top image via Wikipedia. Thanks to John for the link)

May 18, 2015
Catholic League Whines About Louis CK's Controversial SNL Monologue: "He Has Child Rape on His Mind"
Next Post

May 18, 2015 Rowan County Officials Ask Pastor to Pray at Meetings Until They Decide Whether or Not to Appeal Anti-Prayer Ruling
Browse Our Archives
What Are Your Thoughts?leave a comment