Catholic League Whines About Louis CK’s Controversial SNL Monologue: “He Has Child Rape on His Mind” May 18, 2015 Hemant Mehta

Catholic League Whines About Louis CK’s Controversial SNL Monologue: “He Has Child Rape on His Mind”

If you saw Saturday Night Live‘s season finale over the weekend, you saw comedian Louis CK deliver another edgy monologue. Last year, when he hosted, he talked about God as an abusive husband. This weekend, he talked about how child molesters must *really* enjoy “molesting childs” if they’re willing to risk such a severe punishment for the crime. 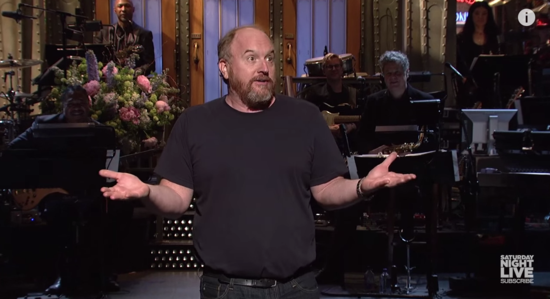 Beginning around the 6:45 mark:

It’s so crazy because when you consider the risk in being a child molester — speaking not of even the damage you’re doing — but the risk, there is no worse life available to a human than being a caught child molester, and yet they still do it!

How do you think I feel? This is my last show, probably.

Look, I can’t key into it because I love Mounds bars. I love Mounds bars. It’s my favorite thing, right? But there’s a limit… If somebody said to me, “If you eat another Mounds bar, you’ll go to jail and everyone will hate you,” I would stop eating them! Because they do taste delicious… but they don’t taste as good as a young boy does — and shouldn’t! — to a child molester! Not to me! Not to us because we’re all awesome…

Alright, we did it. We got through it…

It was hilarious because you knew he was joking, controversial because of the nature of the topic, and unsettling because you just never hear anyone talk about that sort of thing on national television. (I don’t buy the argument that he was making light of pedophilia. Rather, he was exploring what must be going on in the head of a pedophile.)

Still, while there may be fair criticisms of the joke, I found it especially ironic that one of the naysayers was Bill Donohue of the Catholic League, who said:

Louis C.K. needs to explain why he has child rape on his mind.

It’s incredible that a staunch defender of the Catholic Church — which has shielded actual pedophiles — is more upset with a guy who jokes about the topic than the people in his faith who actually commit the crime.

Maybe people wouldn’t be thinking about child rape so much if Catholic priests weren’t always in the news for raping children.

Donohue adds that “[the] ‘joke’ didn’t go over too well with the audience,” but he’s wrong about that, too. You can hear their reactions right on the video. Yes, they’re gasping at the very thought of someone trying to make sense of something so horrible, but it’s followed by gut-busting laughter when they realize the sort of humor they’re dealing with.

It’s laughter familiar to anyone who’s watched CK’s standup before. You just don’t hear that reaction with traditional jokes. We could use more of it.

May 18, 2015
Yes, Christianity is Dying, and Conservative Leaders Are Avoiding the Most Obvious Solution
Next Post

May 18, 2015 South Carolina Governor Calls on Pastors Across the State to Join Her for a Christian Revival
Browse Our Archives
What Are Your Thoughts?leave a comment