On New Show, Comedian Jim Gaffigan Explores How People Might Treat Him if He Was Caught Holding a Bible May 17, 2015 Hemant Mehta
Patheos Friendly Atheist. ... Want more from the Friendly Atheist? Get our FREE Newsletters and special offers!

On New Show, Comedian Jim Gaffigan Explores How People Might Treat Him if He Was Caught Holding a Bible

Comedian Jim Gaffigan posted a first look at his upcoming eponymous show on his website — it received 500,000 views in the first 48 hours — and it’s just fantastic.

In the episode, Gaffigan, a practicing Catholic who still pokes fun at religion in his act, has to bring home a Bible for his wife. When a picture of him holding that Bible goes viral, everyone begins treating him differently. Some people think he’s too embarrassed to be seen in public with it while others quickly assume he hates gay people. 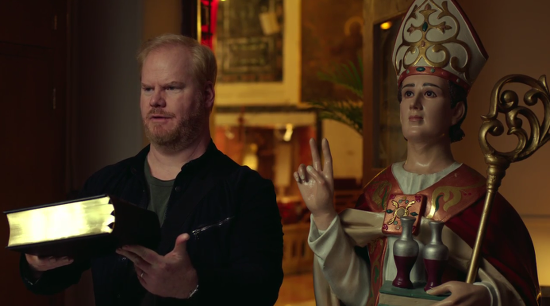 At one point, even atheists come together to denounce him: 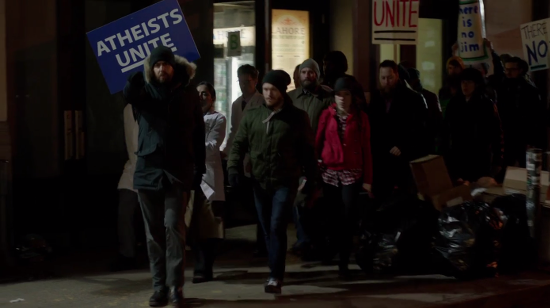 The cats have been herded…

Great episode. Only about 20 minutes long. Lots of jokes that’ll appeal to religious and non-religious people. Tons of great cameos. Make sure you check it out.

The Jim Gaffigan Show has its formal premiere on TV Land on July 15.

May 17, 2015
Murder Trial Hinges on Whether Jehovah's Witness Victim Could Have Survived with Blood Transfusion
Next Post

May 17, 2015 HBO's VICE Goes to Uganda to Witness U.S. Evangelical-Led Homophobia in Action
"... But for steam baths, aquaeducts, roads, a unifying language, a justice system, cities, ports, ..."
CorporalKlinger Christian Nationalist Preacher: God Will Soon ..."
"The Russian people returned to ChristAnd we see what wonders Christianity did for leading Putin ..."
NOGODZ20 Rick Wiles: A “Satanic Zionist Power” ..."
". . . it doesn’t matter what your religious beliefs tell you about LGBTQ people. ..."
Foxglove Should Two Oregon Educators Be Fired ..."
"Definitely my thought. Switch out LGBTQ+ with any racial minority and there would be no ..."
Rob P Should Two Oregon Educators Be Fired ..."
Browse Our Archives
What Are Your Thoughts?leave a comment