Dry Cleaner Owes Damages to Customer, but Can’t Stop Writing “Buggerer” and “Sodomite” on His Checks May 17, 2015 Hemant Mehta

Dry Cleaner Owes Damages to Customer, but Can’t Stop Writing “Buggerer” and “Sodomite” on His Checks

Some people just can’t let go of a grudge…

When Byron Batista dropped off four throw pillows at Rosali Cleaners, he was surprised to get one of them back all torn up. No big deal. He figured he would just talk to the owner. That didn’t go over so well:

The owner “blamed me and said I tore them apart all the while running around behind her counter, flipping me off and pretending to stick her finger in her backside.”

So he took her to court where he won a $75 for damages.

The owner then made out the check to “Byron ‘the buggerer’ Batista.” 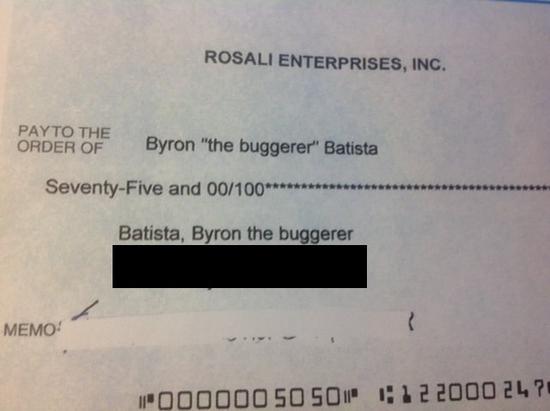 The judge told her to fill out a proper cashiers check… which she then made out to “Batista, Byron (Sodomite).”

The bank said they couldn’t cash checks with foul language on them, so Batista has to try again now.

In the meantime, the negative Yelp reviews are pouring in as are the stories slamming the cleaners. But I’m sure it won’t be long before someone begins a fundraising campaign to celebrate the business owner’s bigotry.

May 17, 2015 War Memorial with Jesus Fish Symbol Still Sits Outside the Boone County (Missouri) Courthouse
Browse Our Archives
What Are Your Thoughts?leave a comment