Christian Businessman Builds 14-Story Bulletproof Cross in Pakistan. This Can Only End Well… May 17, 2015 Hemant Mehta

Christian Businessman Builds 14-Story Bulletproof Cross in Pakistan. This Can Only End Well…

I guess no one close to this guy had the heart to ask him, “What the hell are you thinking?!”

But don’t worry. Everything will be fine. Because it’s bulletproof. 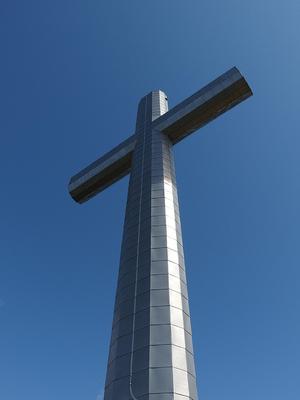 It is being built at the entrance to Karachi’s largest Christian cemetery, towering over thousands of tombstones that are often vandalized. Once his cross looms over such acts of disrespect, Gill said, he hopes it can convince the members of Pakistan’s persecuted Christian minority that someday their lives will get better.

“I want Christian people to see it and decide to stay here,” said Gill, who started the project about a year ago.

As for the cross, Gill called it “bulletproof,” noting that it sits on a 20-foot underground base. “Tons and tons of steel, iron and cement,” he said as he looked up toward the top of the structure. “If anyone tries to hit this cross, they will not succeed.”

For his sake, I hope it doesn’t stir up a hornet’s nest.

Even though it’s totally gonna stir up a hornet’s nest.

20% of the workforce has already quit in protest, but it should be completed later this year. So I suspect we’ll all be writing about it against sometime in late December after the inevitably peaceful inauguration.

(via Christian Nightmares. Image via Guilhem Vellut on Flickr)

May 17, 2015
Actually, This Plan Would Probably Backfire on Churches...
Next Post