On Real Time with Bill Maher last night, guest Ayaan Hirsi Ali shared her life story and formula for reforming Islam (which calls on Muslims to adopt less extremist ideology — good luck with that one).

They also spoke about why liberals have been among the louder voices criticizing the cartoonists drawing Muhammad rather than the people killing them. 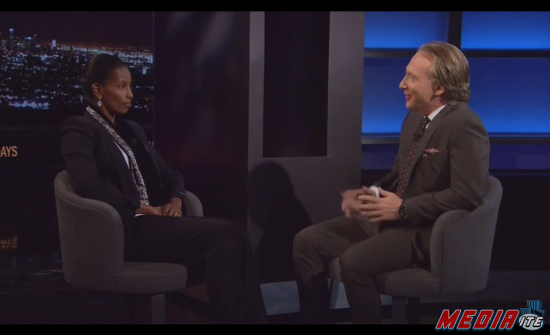 That’s just a portion of the complete exchange. I thought it was a great interview for Hirsi Ali. Her critics love to straw man her as someone who believes all Muslims are identical and equally evil, but her suggestions for reform on the show (as in her book) focus on what moderates can do to help fix the faith. Those goals may be unrealistic, but they’re certainly not dismissive of good people who are Muslim.

You can see the full video at Mediaite.

May 16, 2015 Florida Sheriff, Unable to Separate His Faith from His Job, Delivers Sermon in Uniform
"“Jude-Christian values”. Drink!"
Rational Human GOP Senate Candidate Pushes for a ..."
"https://uploads.disquscdn.c..."
some b@st@rd on the internet For Many Christian Women Raised in ..."
"They thought they were living in an escapist movie. All you have to do is ..."
Juniper A Capitol Rioter Was Arrested After ..."
"OT:Question: Could you ever get behind a vaccine mandate for everybody? Ron Johnson(the senior United ..."
starskeptic For Many Christian Women Raised in ..."
Browse Our Archives
What Are Your Thoughts?leave a comment