Bus Driver Yells At 11-Year-Old Girls: You’re Gay and Will Burn in Hell for It

Last Friday, 11-year-old Maurissa Rushing was on the bus heading to Pathway Academy, a charter school in Kansas City, Missouri. She sat next to her best friend and they played a game that involves one girl’s fingers racing up and down the other’s arm.

When the bus arrived at school, the other kids were let off, but the driver asked Maurissa and her friend to stay behind so she could teach them a lesson: 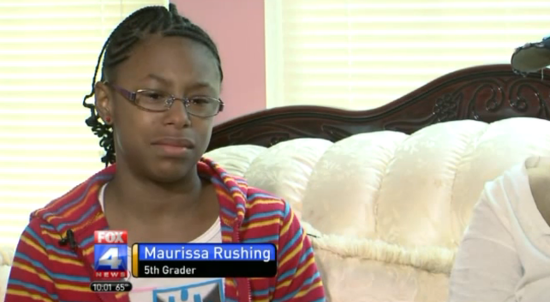 [Maurissa] said the driver told the two 11-year-old girls they were gay and would burn in hell for it.

“She said that we are gonna burn in hell real bad. I didn’t expect it to happen,” Maurissa said.

The 11-year-old says about 10 minutes later the driver let them off the bus and she immediately went and told a teacher and the principal, but her mother says she has yet to receive a phone call.

What the hell…? It wouldn’t matter if the girls were talking about their lesbian crushes; the driver still had no right to admonish them.

First Student, the bus company, says they’ve fired the driver and are investigating why the parents weren’t notified immediately.

Pathway Academy officials, who did nothing to help, are wiping their hands clean of the whole matter, saying they had no role to play even though they were the first people to hear about the incident. They didn’t contact the parents either.

It’s just irresponsibility all around. All because Jesus wants little girls who play with each other to know they’re going to suffer for all of eternity, I guess.