The Joy of Being an Atheist is Beautifully Captured in This New Film May 14, 2015 Hemant Mehta

Last year, Chris Johnson released a multimedia book about atheists called A Better Life: 100 Atheists Speak Out on Joy & Meaning in a World Without God. The book was years in the making and came about after one of the most successful Kickstarters for an art book in that site’s history. It was incredible to be a part of the project and I think the final product was just stellar. 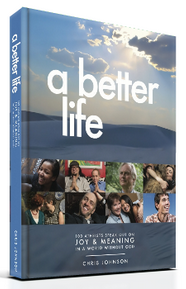 In addition to taking pictures of atheists, Chris also shot a lot of video, and he has just released a feature length documentary that compiles interview clips from some of the people in the book. I had a chance to watch the film the other day and it was beautiful — not just how it looked, but what the atheists had to say. I wish I could’ve heard them when I first became an atheists. This is like an extended “It Gets Better” video, featuring Matt Dillahunty, Julia Sweeney, Cara Santa Maria, and several others.

You can stream the movie online, download an HD copy of it, or buy it with the book at a discount.

If not for yourself, consider getting it for an atheist family member. It’s the culmination of years of work by Johnson — and once you see the products, you’ll understand why.

May 13, 2015
Useless New Tennessee Law Creates Weekend of Prayer for Students
Next Post

May 14, 2015 Dan Savage's New Sitcom, Featuring an Irish Catholic Family, Looks Very Promising
"No one gonna post it? OK, I will.To P-ass-tor Shane Vaughn...https://imgur.com/gallery/w..."
NOGODZ20 MAGA Cultist Pastor: The COVID Relief ..."
"Can you walk like an Egyptian?"
larry parker E.W. Jackson: God, Please Let Biden ..."
"YOU TAKE THAT BACK! NOW!"
BensNewLogin Son of “Shaking Head Prophetess” Admits ..."
"Just notice my gaffe. Have corrected.Boy, one little letter makes all the difference."
NOGODZ20 MAGA Cultist Pastor: The COVID Relief ..."
Browse Our Archives
What Are Your Thoughts?leave a comment