Arizona Christians Work Together… To Destroy the One Progressive Church in the Area May 14, 2015 Hemant Mehta

If there’s one thing conservative Christians despise more than atheists, it’s “progressive” Christians, the kind of people who don’t always vote Republican or assume gay people getting married will lead to the downfall of society. 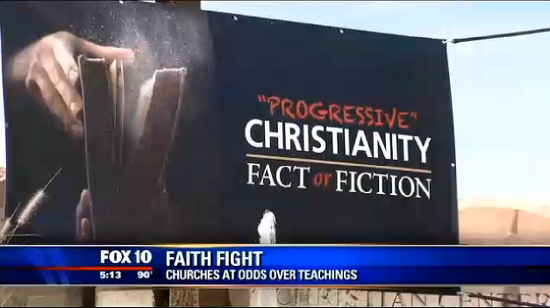 The Fountains is the only progressive church in Fountain Hills [Arizona] and [Rev. David Felten, head of The Fountains Progressive Christian Church] says it offers an option to biblical Christianity.

Now, eight other churches in that area are coming together to push back against this “Jesus loves everybody” nonsense:

… Rev. Bill Good acknowledges the coming Sunday messages are meant to push back against the progressive Christian movement.

“Frankly, we think progressive Christianity is misleading a lot of people,” he said. “There are some half-truths and untruths coming out and that are not helpful to folks that are trying to find their way to Jesus Christ.”

Good says this is the first time this many churches have joined together: Lutheran, Baptist, Presbyterian — all to send out and share the same message about biblical Christianity and talk about how it’s different from progressive Christianity.

It’s so refreshing to see Christians of several stripes working together to destroy the one church in the area that has any chance of appealing to non-Christians.

And then Christians wonder why people are leaving their churches…

May 14, 2015 Finally, God Gets the Blame in a Football Loss
Browse Our Archives
What Are Your Thoughts?leave a comment