Wellington is the “Godless” Capital of New Zealand… and Other Highlights from the Nation’s Census May 13, 2015 Hemant Mehta

The New Zealand Herald went through the 2013 census as well as the Deprivation index (measuring wealth) and combined them in a fascinating interactive chart: 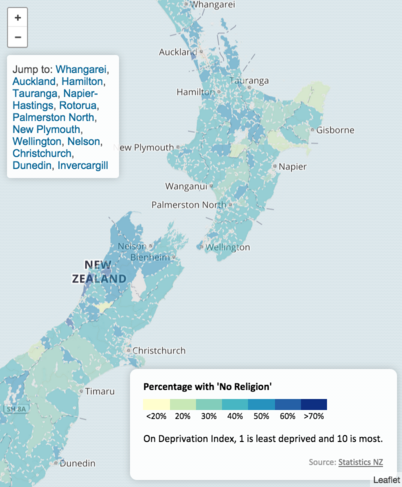 That’s a hell of a lot of color, and the darker it gets, the less religious it is.

What they found won’t surprise you, but it’s fun to point out a couple of things:

Rich Kiwis have turned their backs on God and religion, with religious New Zealanders living mainly in poor suburbs.

The Pew Research Center found something similar in the United States, with the highest income bracket becoming less religious over the past several years. 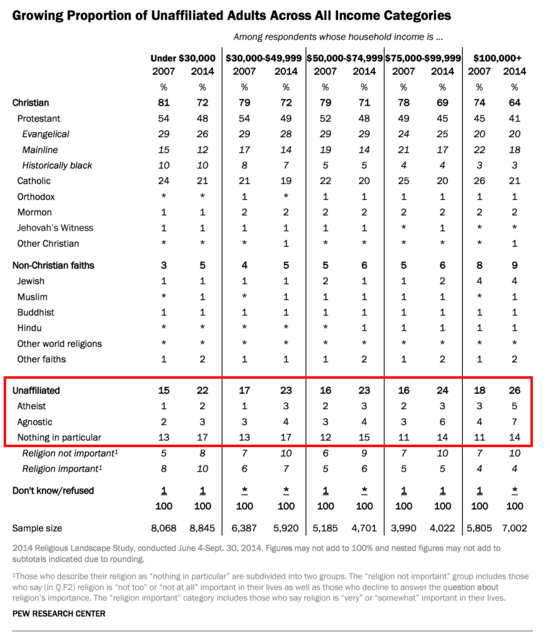 Wellington is the “godless” capital of New Zealand, with five in 10 people there saying they have no religion. And Dunedin is the godless capital of South Island, with almost half of the city’s population declaring the same.

Half the people say they have no religion?! That’s just phenomenal. I live pretty close to a large urban city and I’m still jealous.

Reader Sam points out what’s happening on the other side of the spectrum:

Auckland is the only city with increasing religiosity, [but] this is almost all imported [since] approximately 80% of immigrants live in Auckland & they are significantly more religious.

You can read the longer summary here.

(Thanks to Sam and David for the link)

May 13, 2015
Judge Orders School District Teaching Abstinence-Only Sex Ed to Pay Parents Who Forced Them to Stop
Next Post

May 13, 2015 Judge Gives Green Light to Woman Suing New Jersey Officials Over Rejected “8THEIST” License Plate
Browse Our Archives
What Are Your Thoughts?leave a comment