There’s evidence of a “miracle” at St Patrick’s Catholic Church in Rochelle, Illinois. 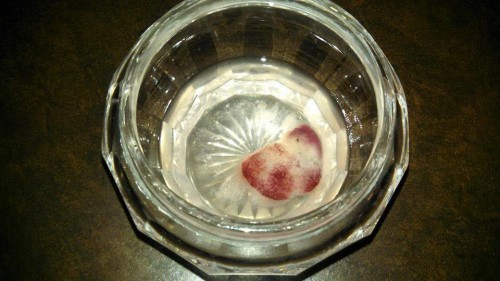 You know, this exact thing happened years ago in Minnesota. Wafer. Water. “Blood.” And there turned out to be a perfectly good explanation for it that had nothing to do with ridiculous Catholic theology:

The archdiocese sent the host to an unnamed laboratory to be tested and released the results Wednesday in a statement from archdiocese spokesman Dennis McGrath.

“Exhaustive biological analysis by an independent scientific laboratory has determined that the reddish coloration on the Holy Communion host fragment that was kept in a water solution after it was discovered on the floor of St. Augustine Church … was caused by a fungus. The host in question has been disposed of in a manner prescribed by church law.

“While the Catholic Church fully recognizes the possibility of miracles and remains open to their possibility, it does so with extreme scrutiny, investigation and care. This incident was the result of natural biological causes and should not be considered in any other way.“

But rather than even consider a rational explanation, this Illinois church jumped straight to “miracle.” Church officials say they’re awaiting “an official ruling” from, I assume, the Vatican.

(Actually, since they believe the wafer is literally the body of Christ, wouldn’t the wafer turning red be the opposite of a miracle…?)

In any case, how long do you think it’ll take before they figure out God’s not really sending them a sign? I call dibs on “never.”